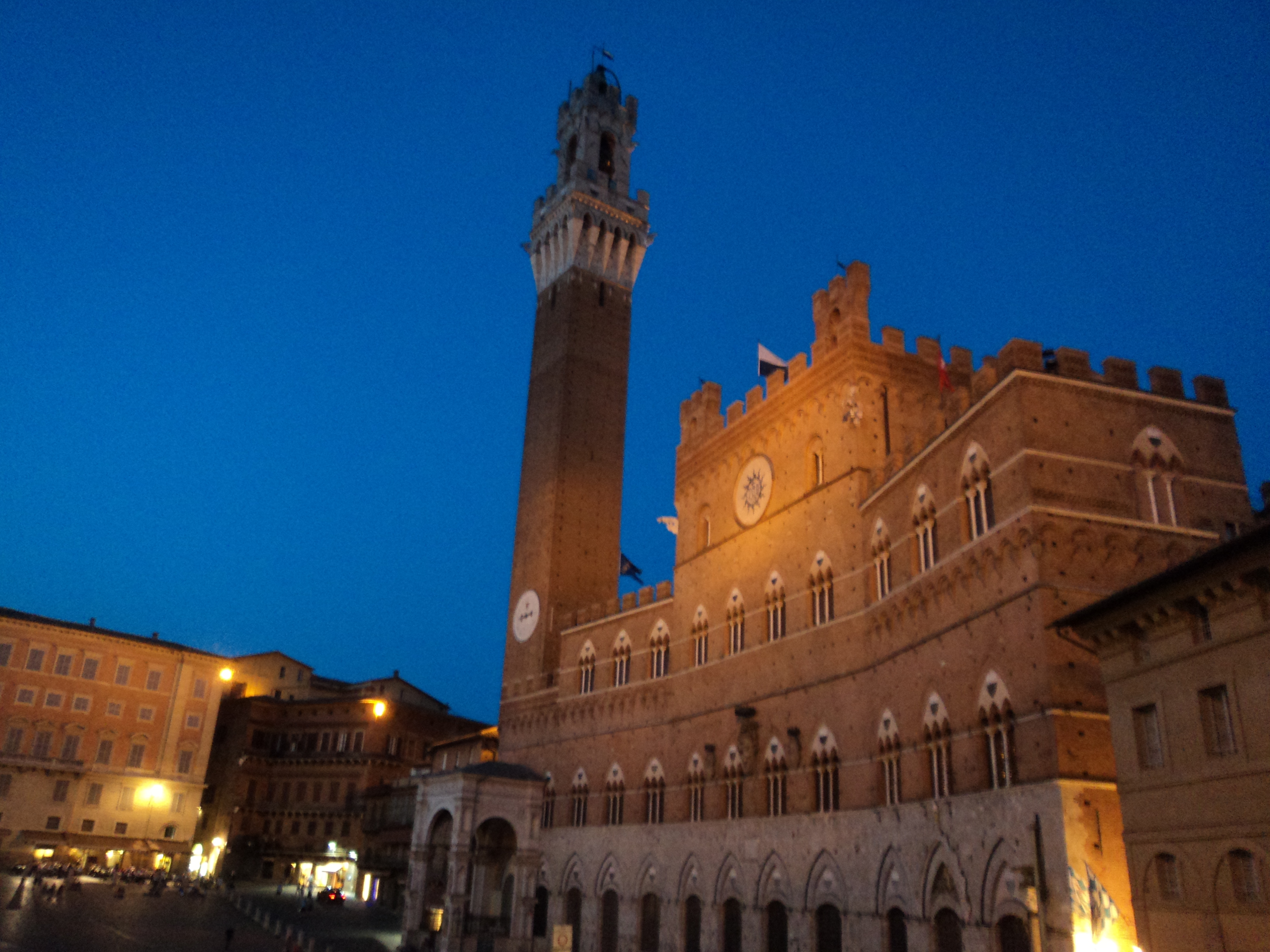 This article is written as an answer to why Indonesian students who are privileged enough to go abroad should take full advantage of their experience. Too often I heard my Indonesian friends say they don’t like Canada, it’s too cold, there is nothing here, everything back home is much better, and I answered by shaking my head.

In 2010, I departed from the Soekarno-Hatta airport with close to 20 of my friends sending me off. I was the first amongst my friends to leave my hometown, Jakarta; 12 hours after our graduation day to be precise. I remember it vividly as if it happened yesterday; I was dressed in a blue gown, giving my graduation speech, received my roll of diploma, and shortly after, I was back home for last minute packing before leaving for the airport at 5 in the morning.

I was grateful that I was admitted to University of Toronto, one of the best universities in the world, following the footsteps of my older sisters and uncle. My life changed for the better afterwards. I adapted, grew out of the “spoiled girl” image, worked hard, and finally able to be independent. Up to this day, one of my biggest personal achievements would be working hard and earn enough money to fund half of my exchange trip to Siena, Italy.

In the summer of 2012, I packed my suitcase and left for a five-week Summer Abroad program ran by the University of Toronto. I stayed in a small medieval town called Siena in Italy. It was simply the best five weeks of my life and not just because of the amazingly cheap Italian food or the friendly locals, it’s more for the reasons that I’m learning more about myself: the extent to which I can travel away from familiar things, the extent to which I am willing to work for something I’m passionate about, and the extent to which I can adapt to a new environment.

When I was a first year student in the University of Toronto, Mississauga campus, I found out that UofT has a Summer Abroad program where students can stay in countries of their choice for 4-6 weeks, depending on the destination. They would gain a full-year university credit while traveling and immersing themselves in the culture of their destination countries in addition to having the opportunity to gain new experiences, friends, and life skills.

I asked my parents if I could go and their answer was straight up: NO. I was devastated. Later I found out that their reason was more of the concern of my safety and the unbearable thought of their little daughter traveling by herself with no one to watch over her. If this ever happened to you, my tip would be to prove to them that you can be independent. This includes getting your school work done, getting good marks, consider getting a part-time job and spend your money in a responsible manner, and certainly not partying until 5 am in the morning and losing your phone in the process. I bargained with my parents and I was stubborn enough to say that I will pay for the trip myself (which is pretty impossible given that I’m a part-time worker and a full-time student) but then they agreed to pay half of my trip.

At the end of my first year, I applied for an Off-Campus Work Permit and started my first job at Walmart, then at a family-run Italian bakery where I learned so much about Italian culture. Six weeks before my departure, I worked as a Street Fundraiser for Canadian Red Cross. I earned close to $2,500 at the end of my second year and to my surprise, I got a merit-based scholarship worth $1,000, which I used to fund my trip. I would write about how to save money while living abroad but that would be in another post.

How Much does a Summer Abroad program cost?

This table is based on Summer Abroad 2013 program. When I went in 2012, the cost wasn’t as high and international students did not have to pay different fees. However, this cost chart gives a good idea of how much a student would spend for a UofT course, flights, accommodation, food, textbook, meals, etc. 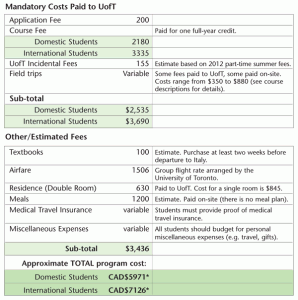 Now, all the nitty-gritty calculations aside, here is a brief description of my life in Siena and why every penny that I spent was so worth it:

Siena itself is divided into different contradas which are sort of their own neighbourhoods. They are marked by different flags and they have their own churches, fountains, parties, and so on. It’s almost like having different states in one small town. Every year for 2 days in August, Sienese people have a palio which is basically a horse race between these contradas. They have allies and enemies of their own and you can only be a part of a contrada if you’re born into it or baptized to it.

This horse race is a tradition since the 1500s and they take it seriously. When I was there, the Olympic game was happening in London but not a single person mentioned Olympic games, the horse race is clearly more important.

My weekdays in Siena would look like this: Every morning, I always went to a little cafe by the residence I stayed in. The barista’s name is Carlo and I was a regular there. He knew my order well: un cappucino con due zuccheri, to go. Carlo is generous enough to give me the biggest croissant every day which I munched while walking to class.

Siena in the morning seems mysterious in its own way, much different from the afternoon where tourists pack the streets and stores were busy. In the morning, I saw locals getting ready, opening their restaurants or most places weren’t even opened yet. I saw trucks of fresh fruits being delivered to small fruit shops and while crossing Piazza del Campo, it stood there in its grandeur, glistening under the rising sun.

In the afternoon, there were many tourists and the sun was blazing hot. Although it was a perfect timing for 2 scoops of fondant and strawberry gelato, I still preferred to buy 2.50 euro pizza and stayed inside my friend’s room. We would just chat there until the sun set or did our readings in the back garden which overlooked the Tuscan hills.

After finishing our readings and taking some naps, we would gather with some friends and decided where we would have dinner. We usually had pasta and wine or go to contrada dinners. After dinner, we often went for a cup of gelato. For the first couple of nights, we went to Cinema di Fortezza, an outdoor amphitheatre near the fortress where we only had to pay 5 euro to watch a movie. The summer nights were beautiful beyond words; we would sit in a semi-circular stone podium with our pillows, our friend would buy a bottle of wine, which we poured into little cups and cheered for the night. The lights were dimmed as the movie was starting and only then could we see the stars and fireflies around us.

In the weekends, we took a bus or a train to visit Florence, Rome, and Cinque Terre. Florence is one hour bus ride away from Siena, so a day trip there is doable. On the last weekend of my stay in Italy, I flew to Paris since it is only 2 hours away by plane and obviously, much cheaper than flying to Paris from Toronto.

There are study trips offered depending on which classes we take. Since I’m taking Modern Italian Culture, our study trips were to visit small towns in Tuscany and really see what Italians and their culture are like. We visited Assisi, Monteriggioni, San Gimignano, Lucca, Pisa, Perugia, and on the last day of our study trip, we went to a farm called Il Ciliegio. We were shown how wine is made and had a wonderful 3 course meal on top of the Tuscan hill with the stars above us. It was easily one of my most memorable moments during my stay there.

These experiences are embedded in my mind for the rest of my life. I learned so much about myself and my capabilities as an individual, and also gained soft skills such as how to make friends, adapt to new culture, be considerate, travel safely, pack lightly, and so on. I remember in my graduation speech I quoted Mark Twain: “Twenty years from now you will be more disappointed by the things you didn’t do than by the ones you did. So throw off the bowlines. Sail away from the safe harbor. Catch the trade winds in your sails. Explore. Dream. Discover.”

And I can proudly say that I’m living up to that quote.