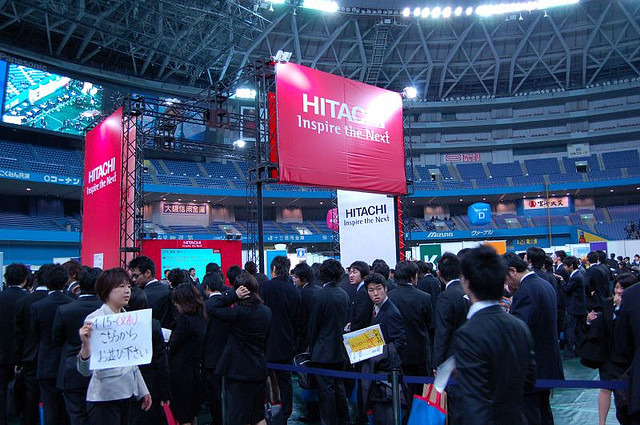 Are you one of those who wants to go to a Japanese university in order to work in Japan? There are many who plan to go back to Indonesia after finishing their study, but I also know many who came to Japan with the hope of finding a job here after graduation. This case is not rare, so please rest assured that you are not the only one. However, it is better to be prepared for what you decide.

Some say that finding a job in Indonesia is difficult. Yes, maybe. But job-hunting here in Japan is not less difficult. In fact, I think it is totally difficult, especially for foreigners. You had better know what you are diving into before deciding everything too fast. There are some of you who may think that the content of this article is not university-related. But it is related. Yup, you have to do your job-hunting and university life at the same time. Some of you may ask again why. Through this article, let me give you a brief overview of job-hunting in Japan and why it is important to prepare yourselves.

How job-hunting in Japan works

In many countries, including Indonesia, job-hunting does not have a specific period. What does it mean? You can just apply to companies you like any time throughout the year. Companies can also do head-hunting throughout the year whenever they are in need of employees with specific skills. That will not work in Japan. Job-hunting in Japan (shukatsu), is being done once a year with a specific calendar. Each company has different schedules, but the overall dates are the same. If you fail this year, you have to try again next year. You may have known the word “ronin” for those who fail university entrance test and have to wait for another year. Yes! this kind of word is also applicable to employment.

Here in Japan, students have to get a job BEFORE their graduation. It is a culture. But why? After graduation, you are not a student anymore, so people will see that you are wasting your time. Those who are unable to get employed usually go to many seminars and common courses, or join several volunteer services in order to fill their achievement before finally attempting to join the job-hunting again the following year. Even if you do all of that, you will still be doubted, “Why wasn’t you accepted in any company last year? What did you do during your study in university?” And if you fail again, it will become harder and harder in the upcoming years because the doubt of the interviewer will be much more harsh. “What were you REALLY doing until now so that you couldn’t get accepted even in one company?” In the end, there is no other way except working part-time or opening up your own business or working in other places (not companies) to sustain your life.

Balancing between job-hunting and lab life

As I said before, you have to get a job before you graduate. That means job-hunting starts very early during your study. The whole process of job-hunting usually takes more or less one year, depending on your luck. The overall basic process goes like this. Do take note that curriculum and also fiscal year starts in April in Japan, so the graduation for most Japanese is in March.

Suppose that you will finish your undergraduate study in March 2014.

Step 1: Research on companies, including job fairs (starts near the end of third year of study, around November or December 2012)

Then, you can enjoy the rest of your university life, I mean, you can spend your last semester to prepare your thesis defense and so on.

Notice that the above is for undergraduate students. Since master students are only given two years for their study, they have to start Step 1 in their FIRST year! Take note on that! For those who are planning to pursue a Master degree in Japan and hope to get a job also in Japan directly after graduation, you have to plan everything fast! There is no time for dwelling on many things.

Research on companies takes quite a lot of time to get and learn information about companies. I stumbled upon one article on IM blog about students asking help from alumni abroad and they only ask simple things about the university they are interested in that can be found just by googling. I totally agree that these students have not tried enough. Self-research is a very important skill. Just try going to an interview in Japan without knowing the public corporate profile of the company, and you will feel like being crushed under the interviewer’s feet after coming out of the room.

It is normal to do an entry to more than 70 companies. Do not be shocked! This is common, because everyone is trying their best to increase their chances of getting accepted. I explained already that things will be more difficult next year if you fail. Entry does not mean you will take their tests yet, but only open up your way to more detailed information about the companies. Out of the 70ish companies you did entry, it is normal to go to interviews of more than 30 companies. Oh, you still think the number is incredible? Yes, actually it IS incredible, yet that also represents the amount of time you have to dedicate during job-hunting in Japan. Many companies also hold their interviews in big cities, so you have to go to Tokyo, for example, from the city you are studying at. It is not rare to see a student take a one-month leave from the school because he needs to go to several interviews outside the city. If you are lucky to be accepted in your first 5-10 companies, there is no need to continue the others though.

The point here is to be able to balance your job-hunting and life in laboratory or university, especially for foreign students. Remember I wrote that you can enjoy your last semester after you successfully get a job offer. Well, it works a little different for foreign students who get admitted in October. Those who came to study here through UtoU process are usually October-intake, so their graduation is in September, thus their last semester COINCIDES with the most hectic period of job-hunting. This is one of the challenges you have to go through if you get admitted in October and you are going to find a job in Japan. For your information, I got my job offer just a week before my graduation. I did not have many chances to focus on my thesis during the interview period. Luckily I finished almost all of my research in the previous semester.

Everything is not flexible in Japan. Even every format is decided. Do one wrong and you’re out. CV is to be written in a specific CV paper (rirekisho). WRITTEN, not TYPED. Handwriting shows your personality. There is no need to make a distinguished CV (for example, good layout, design, etc). All companies use the same CV layout throughout the country. Of course, it is different if you are applying to a designing or creative company. But for a normal salaryman, all formal formats are already decided and used nationwide. And then, there is also Japanese language. I will elaborate later but yes, you need to write the CV in Japanese, except if you are applying to a specific global employment program.

Japanese tradition for appearance during job-hunting and greetings such as bowing is very important. You have to wear a white collar shirt with a necktie, and black suits during job-hunting period. Only plain and stripe-pattern neckties are allowed. Use black handbag. All of these is to suppress individuality. Pay attention to the degree of bowing to different people of different status (5 deg, 10 deg, 15 deg). Shave. Cut your fingernails. Learn Japanese business manner, for example how to receive namecards and the order you put them on the table. There are still many of the rules out there. Miss one of these, and you will be rejected without knowing the reason although you feel you answered all the interviewer’s questions very well. And one last difficult thing for Indonesian usually is to come 10 minutes before appointment. There is no rubber time in Japan, BEWARE! Japanese is VERY punctual. Just try coming late, and you lose all trust from people around you.

Next is Japanese language. Yes, it is important. Some companies may have a specific global employment program that does not require you to take the selection process in Japanese, but all I can say is there are only a few of them. Learning Japanese is optional during your life in university though. Some people just focus on finishing their study fast and do not want to give extra time to learn Japanese deeper. Why do I say ‘deeper’? Usually, all of you will have to learn basic Japanese. Those who came here through GtoG will have to attend a Japanese language school for a year before entering university. Those who came here through UtoU will have to find their own way to learn Japanese. Believe me, you need to study the basics in order to survive. Many stop learning after finishing the Basic level. However I suggest that you continue to Intermediate and even Advance if you have time, to be able to perform well enough during your job-hunting. Speaking with Japanese friends often usually helps you grasp the language fast. So do not go out together only with Indonesian or foreign friends.

Money affects your job hunting. Yes! You have to pay all the travel expenses by yourselves when you go outside the city for interviews. Planes, trains, buses and even hotels. It is common for students to stay at their friend’s house to save money. When you arrive at the final interview, the company will pay all your lodge and travel expenses. But rest assured that some companies pay for you from the first time. Nevertheless, you have to save a lot of money before starting your job-hunting in Japan. I had more than one experience of not being able to go to interview because I did not have enough money at that time.

You can increase your income by working part-time (not only from scholarship). But that will take some of your lab time. Everything is up to you. I have one lab-mate who did not work part-time, but his research progress was on a whole different level from the progress of the other students. He put most of his time on his research while he did not have any additional pocket money.

Finally, the conclusion is, study life here in Japan could be very hectic if you are planning to find a job. However, do not be pessimistic. It can be overcome easily by good time and money management. It is not impossible to get a job here, I tell you. I did, many of my friends did, and many other foreigners also did. I am just saying that it will not be as easy as you think. Just be sure to prepare everything, including your resolution to not give up.

Last but not least, this article below from Rocketnews will help you understand more about job-hunting in Japan as a student. The writer explains about an animated video of Japan’s hellish job hunting process, titled Job-Hunting Mad Rhapsody. By making you read it, I do not mean to scare you. It really happens, but I believe Indonesian students can overcome it without any problem because I know we Indonesians are hardworking.