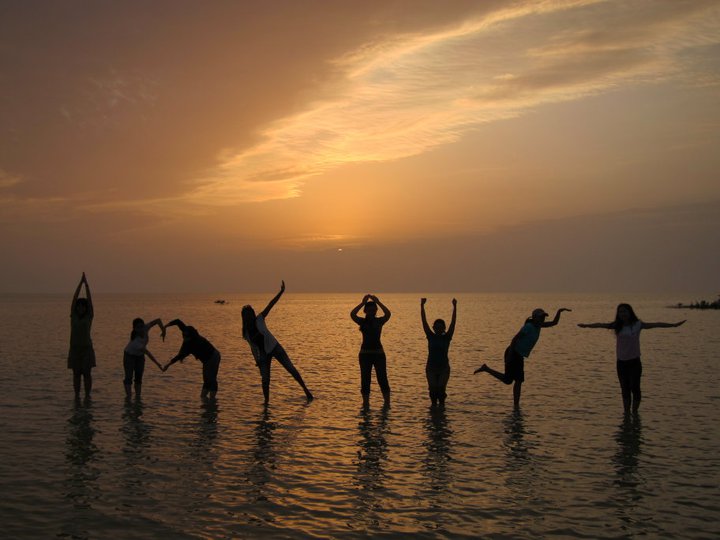 It has been almost nine years since I first packed my life into two check-in luggages and traveled the world on the ongoing quest to further my education. Three degrees and five cities later, people are still most surprised when I mention that I spent two years in the Middle East – in Saudi Arabia, nonetheless. It will take me a thousand and one nights to share everything I experienced and learned in a country that is also known as “The Kingdom”. But for today, let’s begin our journey with five tales.

1.     Sometimes, great adventures start with a leap of faith.

Let’s be honest, Saudi Arabia is not commonly known as a destination for higher education. Yes, in the Kingdom I could not drive in the country and I do need to cover up using abaya, but what most people do not know is that more than 95% of the time I spent in Saudi Arabia was in a campus, which is a gated Westernized community. I dressed as I normally would (modestly, of course), and used English for everyday conversation. These days, an increasing number of Middle Eastern countries have realized the importance of quality higher education and have started putting more attention in the science and technology sector. Perhaps the choice to further your education (or career) in the Middle East has not been in the options, but perhaps, you should take a chance.

I went to King Abdullah University of Science and Technology (KAUST), which is located by the Red Sea in Saudi Arabia. There are a lot of well-known Western universities opening up branch campuses in the Arabian peninsula, such as New York University (NYU) in Abu Dhabi and Carnegie Mellon, Cornell, Georgetown, and Northwestern in Dubai. When I signed up for my Master’s at KAUST, the campus area was still a desert and the faculty had not been hired yet. Today (almost five years later), KAUST has produced Master’s and PhD graduates who published in international scientific journals and continue to work in science and technology field around the globe.

My advice is to look into the program and the faculty offered to see if they will be a good match for you. If possible, contact the current students and alumni. No doubt, you will experience ‘culture shock’ when you first arrive in the Middle East, but with an open mind and a sense of adventure, nothing is impossible! Not to mention that the Middle East is such an excellent hub for traveling, as it is positioned near Asia, Africa, and Europe. Another good reason to go is that most of the countries have so many observed holidays throughout the year, which could reach up to 40-50 days of paid time off per year for employees in some companies. Going to safari in Kenya, backpacking in Europe, or just relaxing at home in Indonesia during break is your choice to make, as all of these destinations can be reached in nine hours or less.

P.S. Most of the Middle Eastern countries have their “weekend” on Thursday and Friday (or Friday and Saturday) while Sunday is a normal working day.

2.     Be grateful, especially for the little things.

Growing up in Jakarta and completing my undergraduate education in the United States, I often take simple things for granted. For example, of course I should be able to try on my clothing before purchasing them and of course I could go to Sephora to ask for some advice from the salesgirl on what moisturizer to use, right? I was surprised to find out that in a regular mall in Saudi Arabia, there will be no fitting room for female shoppers and all the storekeepers are men, including the ones in cosmetic and lingerie shops! How awkward! Thankfully, things are moving towards a better direction. Since 2012, men are banned to work in lingerie shops. You may think these things are trivial, but after spending some time in the Middle East, I recognize this to be an accomplishment. I feel so lucky that in Indonesia, I can drive and vote (and buy my yearly supply of underwear!)

Another interesting thing that I learned was how the people’s mood changes after the rain. Everybody knows that Saudi Arabia consists mostly of desert, but I had not really thought of the scarcity of rain. Every day was as sunny as it could be, with little bits of cloud every once in a while. I remember my first rainfall — it could not have lasted more than ten minutes, yet my classmates and I talked about it for the next ten hours — at least. We went out to the streets, we took pictures and videos, we updated our Facebook status. Sometimes, with our busy life, it is easy to forget how blessed our life is. We forget to be grateful. It is nice to acknowledge the little things in life.

Speaking of being grateful, even more than ever, I learned to live and cherish every moment. If you ask someone who has spent time in the Middle East about what they have missed the most from their time there, I bet most people would say that it’s the friendships they made. Because almost everyone is so far from their family, your classmates and friends are your family. They come from all over the world and grew up in different culture, but soon you will find that humankind from different countries still has a lot in common. It is so great to be able to have friends from all over the world. However, most people are only in the Kingdom for a short time. The Middle East is unlike the US, Canada, or Australia, where most international students consider to stay to work, or even go through the immigration process to stay in that country for an extended period of time. In the Middle East, most people only stay for a few years, true to the dates written in their study or work permit. We often joke that the Kingdom is a big waiting room at a big airport, where you are just waiting to see where you would go next. This is not always the case, but it is often so. Hence, when your new best friend from halfway across the world is having her birthday, you would want to throw the best party possible because it might actually be the last time you get to celebrate it with  her and the other friends that you met while you are in the Middle East.

In addition to being grateful, another must-have attitude is positive thinking. You will find that most things in the Middle East move at a slower pace (especially during Ramadan), and you will hear a lot of “Insha Allah”s (God Willing) as an answer when you ask someone whether they can do something for you. It could be very frustrating when you are trying to get something done, but it will definitely teach you the lesson of patience and persistence, all while respecting the local culture, of course!

After so much work of simply trying to survive, it is easy to let the days, weeks, and months pass by. Especially with the subtle change in season, and the great friendships you have now made, before you knew it, suddenly a year has passed since you arrived. It is important to have goals and to remember why you are there in the first place. To get your education! As much as the education outside of the classroom is important, you still need that piece of paper which legitimizes the work you have done to graduate.

A lot of the universities in the Middle East are new, and as such, they don’t have the hundreds of years of experience like as most well-established Western university. Be patient, but also be proactive. For example, the laboratories were not ready during the first year of KAUST, but students needed to have some hands-on research experience. With the support from KAUST, a lot of students were able to do their summer internship and research at established collaborative partners of companies and universities abroad. This experience certainly helped boost their resume. Sometimes, even though some things have not been done before, it is not because they are impossible to do. You just have to ask!

At the end of the day, living as a female student in Saudi Arabia has its challenges, and inconveniences. But often times, I am glad that I went through it. I made great friends from all over the world, travelled, and on top of that, I received a Master’s degree. If you happen to be thinking about going to the Middle East, I recommend you to go with an open mind and a sense of adventure. If you want to learn more about my almamater in particular, you can check out the website made by the current students and alumni at www.kaustina.org.

The images were supplied by the author.