In a month, it will have been one year since I graduated with a Master of Arts in Political Communication from the University of Leeds.

Not long after, it would have been one year since I officially moved back and started working in Jakarta, Indonesia after five years of living overseas in Australia and the United Kingdom.

In less than a year, my life has been very unexpectedly different from what I had always thought it would be. From Jakarta, to Australia, to the United Kingdom, back to Jakarta again. This is my story.

Currently, I work at one of Indonesia’s largest e-commerce platforms, under the department of Business Intelligence as a Sales Analyst for Fashion category. Really strange, I know. We’ll get to that later.

To be perfectly honest, throughout my university days I have never once expected to work in my current position. I’ve had a little change in career aspiration back then, but doing a business analytics job just never crossed my mind.

Throughout my undergraduate studies, I only wanted to become a journalist. I have interned at several different media organizations, pitched and published my writing, and finally co-founded a print magazine in Melbourne at the beginning of my final year. However, towards the end of my studies, I realized that I wanted to concentrate in the subject that combines both of my majors: Media & Communication and Political Science. Long story short, I decided to pursue a Master degree in Political Communication.

During my postgraduate studies, I only aspired to involve myself in the work of campaigning, such as political campaigns or social advocacy. While spending my days studying the theories and innovations of political communication, I volunteered with a group of friends to design and execute a leadership campaign for our friend who ran for President of the Student Union. He won the position. His life obviously changed, but mine too, as from then onwards, I never wanted to do anything but campaigning. I was subsequently employed by the Leeds University Union as their Campaign Assistant for a project that ran throughout the summer. That summer in 2015, I was both working for the Union and on the completion of my masters dissertation, which was about the art of political campaigning. In short, my life was nothing but campaigns.

If you were myself, you would also be led to believe that you were destined for it, and that you would not want to do anything else other than that thing you love the most. However, I soon began to learn that life wasn’t always exactly as planned, no matter how smooth the plan seemed to be going.

When I took my first job in Jakarta, I thought I was going to be responsible for a political campaign. However, as month passed, my responsibility was shifted towards concentrating to the commercial clients’ side. Mind you, I never fancied working for anything commercial when I was still at university. Safe to say, I was sort of that student who dislikes capitalism, still practices it, but nonetheless, never want to be a part of it. I guess it’s the result of those years of studying liberal arts at universities in Western countries, that you begin to have their worldview reflected on your perspective. Hence, moving towards creating communication strategies for commercial clients was something more of a personal breakthrough.

I disliked it. I didn’t hate it, but I felt like I was slowly losing the identity that I’ve built (or known) in years of studies. Yet, eventually, I realized, this might be necessary for me to understand that I am no longer at university. I have to step out of my comfort zone, whether I like it or not.

Months went by, and I began to enjoy my job. Apart from learning basic communications and marketing framework for clients, I began to dwell a lot in the trendy and sexy terms of today’s generation, such as digital, startups, online marketing, e-commerce, and so on and so forth. I loved my job. And more importantly, I have learned a lot of new things. 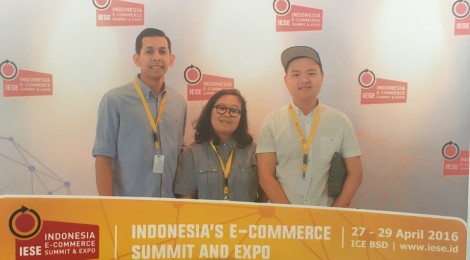 Until one day, I was sent by my employer to an e-commerce summit in the suburb of Jakarta to attend seminars for three days in a row. In between the seminar, I would frequently visit the exhibition where there were tons of promotional booths. And there it was, my future employer that would soon offer me “the unthinkable” of my own.