People might have pre-conceived notions that working abroad generally corrodes Indonesians of the passion they have for their country and that Indonesians are ill-equipped to break through the competitive international job market. Debunking the two myths is Fauzan Reza Maulana, the winner of the 2014 World University Debating Championship (EFL category) and runner up of Mahasiswa Berprestasi Nasional Indonesia 2014. Read on about how Fauzan’s meticulous planning, strong determination and burning passion for the betterment of Indonesia’s infrastructure helped him forge a burgeoning international career as a civil engineer.

Around a year before my graduation, I started to think about how I would start off my career, as one usually does. After asking around for opinions and words of wisdom, the remarks came to a convergent conclusion: career-building was a very dynamic and ever changing aspect of the modern life.

“As conditions, motivations, relations change, I myself will change along with them. Thus, it will be easier to adapt myself to whatever career path was visible in front of me, and follow a set path paved by others.”

Ultimately, I was not too happy with this conclusion. I believed that as an individual, you are capable of being a force of direction and principle. So what I did was set a simple, easy-to-follow, hard-to-betray vision for my career, and this single vision would need to answer two questions:

After a bit of research and deliberation, I set my vision to be: to contribute to improving Indonesia’s infrastructure. With Indonesia’s increasing investment in infrastructure and my background in civil engineering, I figured the vision had the right balance of answering the previously established questions and being general enough so that I had the freedom to marginally change my path when necessary.

By this point, you’re probably asking, why am I telling you all this? And why is this content relevant for an article at IndonesiaMengglobal? Well, it is because religiously adhering to my vision played a big role in starting an international career for myself.

During the past year and a half, I’ve spent almost 50% of my time working in the Netherlands and Turkey, and 80% generally working on international projects. This international exposure does not mean that I’ve abandoned my vision to contribute to improving Indonesia’s infrastructure, to the contrary it is a means to an end. I came to understood that working and studying abroad will be a mere consequence of chasing my vision, when done correctly and tenaciously.

Page 1: The Start of An International Career

It all started when I was awarded with a scholarship to ‘learn’ in the Netherlands for 3-4 months before my graduation. In accepting this annual scholarship, I had to look for the learning opportunity by my own accords. It would have been relatively easier for me to look for a simple short course or to follow a lecturer at a university as they require less permits than something cumbersome like an internship at a company. But I had a different plan.

I had set my eyes on using that opportunity to take the first big step towards my vision, so I put everything I got in applying to intern at a tunnel consultant. In taking this step, I bit the bullet, and investigated all of these niche consultants for vacancies, crafted application letters tailored to each company, and even gambled to postpone my graduation as the application process took longer than expected. But after months of anticipation, the efforts finally paid off. My letter got through to one of them, and before I knew it I was in an office at Amersfoort, Netherlands, working at the global leader for immersed tunnel infrastructure, Tunnel Engineering Consultants (TEC). 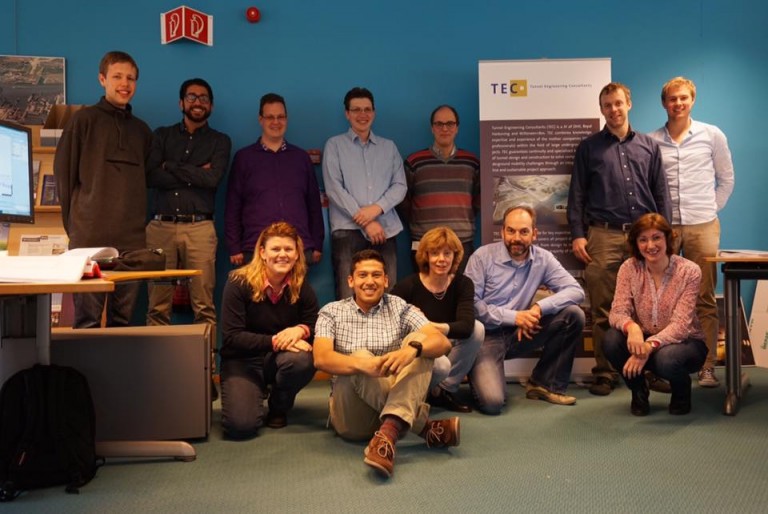 During those four months, we decided that it was best for me to do a feasibility study for the first immersed tunnel construction in Indonesia. Consequently, I was sufficiently motivated to perform for the full course of the internship because of how my skills resonated with the work and how I felt the cause would help Indonesia. After my final presentation, TEC, which was pleased with my performance, offered me a job at their parent company, Royal HaskoningDHV, where I could start as an engineer at their Jakarta office. I accepted the offer, and I found how the trust I had built during the internship prior to my employment was enough to get me sent abroad time and time again for international assignments and projects.

Working Abroad and Working for Indonesia: An Irreconcilable Tension?

I personally know my fair share of people who take pleasure in serving their country, through indirect or direct means, as well as people who orient themselves to work internationally as soon they are able to. But to see an overlap between the two in a person is something I would have to say is a bit rare at the moment. This I think is very much understandable, as intuitively the two seem to have completely opposite agendas.

Having reflected on my own experiences over this past year, however, has led me to deduce a different conclusion. I have finally come to realize that if you genuinely want what’s best for Indonesia, your community, or even yourself, chances are that passion of yours will take you to the international stage of your endeavor. The world is an enormous place, where we’ll be pushed to look to all of its corners for best practices, lessons learned, and historic references to achieve excellence.

By no means do I consider myself at this point a successful example of a person who has a stable footing in contributing for my country, nor someone who already has a solid international career. That being said, I have found several personal methods that I think have eased and kept me in that direction.

I am not the type to boast or even argue as to why any of us should contribute for our nation. All I can say is that it is not impossible to locate your passion and ambitions for Indonesia in a broader, more global context. For me, that’s all I need to know to go full throttle.