I first thought of applying for a scholarship with my best friend. We promised to keep each other fulfil that dream. After a decade later with a lot of rejection letters, it never occurred to me the question “What if that dream is possible?”. I’ve managed to collect rejection letters from schools in Europe, rejection emails from 3 rounds of ADS selections, one of which was from New Zealand.

After several years of trial, it dawned upon me that my goal was merely to collect as many failures as possible. My application was a wish letter to the universe, letting it know that I’m still here following a path to seek knowledge as an act of worship. Its response through rejection notices, was a courtesy of replying. I was not hoping, until my second attempt in Fulbright that got me through.

I still recall the days of late night preparations for the big Fulbright interview. After a lot of requests of prayers from both of my parents, I walked into the building and met others who were also scheduled for an interview on that day. All of whom also came from Kalimantan. I remembered how nerve wracking it was waiting for my  turn to be interviewed. Then when my time had finally come, I was greeted by 6 people, 4 of them were the panelists. All of a sudden, it was as if I was on a spotlight, with too many audiences. Yet the room felt massive. I wore my sasirangan dress, and a blazer hoping my bump wouldn’t show as I let myself shrunk in the seat.

But all of my worries drained down the drain as I was greeted by the most outgoing people who were very passionate in what they do. The interview was in a very relaxing gesture. I did have to speak up a few times amongst the speakers who were bold and direct. They asked me what my plan was, if I were to do master would it be coursework or on what research. Basically they wanted to know why I chose America, what would be the benefits, the relations between my studies and what I would do in the future.

I mentioned since America has the largest economy in the world and I’d really wanted to go to this part of the continent. On the side, we also talked about our hobbies. Overall, it was the most surreal experience of having to be interviewed by keen, highly supportive, talented individuals. I walked out admiring, thankful to have gotten the chance to encounter the tolerant attitude and optimistic outlook of American ways of life.

The Answer to My Prayers

To my surprise, in September 2015 I received an email with the subject “2016 Fulbright MA General: Principal Candidate” just like an excerpt I used to seeing online, posted by previous grantees as they shared their experience.

Congratulations! I am extremely pleased to inform you that you have been officially nominated as a principal candidate for Fulbright Master`s Degree Program (MA General), a Fulbright scholarship to pursue study for a Master’s degree in the United States commencing with the Fall 2016 academic term.

I was thrilled. But the exhilaration was brief, because I realized that getting this nomination as a principal candidate was just another step forward, but anything could still eliminate me during the process. Fulbright candidacy is one thing, being selected by an accredited university in the US and to study as a Fulbrighter is another.

Moving forward after that day, my days were filled with compiling documents. This was when I got a sense of the American way of intensive paperwork. I had been asked for more writing sample, an intensified version, and re-draft my statements. And surely preparing myself for the infamous “Graduate Record Exam”, bound for applying to US higher institutions. Although I’d reached the minimum requirements on both IBT TOEFL and GRE, AMINEF flew me into the capital to take a second test in order to improve my scores and get better chances at the universities. And mind you, pregnant women and disrupted brain is correlated, as I got a slightly lower score. For a few weeks at a time, it seemed like, I was just going back and forth to Jakarta; the airport – hotel – AMINEF – and back to the airport accompanied by my unborn child.

But all that long dwindling whole year of struggle finally paid off when I got that university acceptance letter (LOA) in May 2016. After getting several conditional admissions at various institutions later, I was finally admitted within allocated grant and was invited to attend the Pre-Departure Orientation held at Shangri-La Hotel with the rest of my batch in the following week. All praise to God. I can’t ever be more grateful than that day. I just had my first baby and we were all going to America. 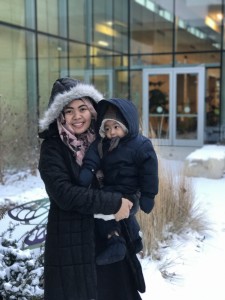 y question of what if, now becomes what now? What now, in the middle of building my career and only one year left to get promoted – I will need to be on leave, resetting my years of experience. What now, having just started to adapt to married life with the all too familiar routines to be going someplace far? Should I take my spouse with me and leave behind our permanent jobs ? What is it like to going back to school after years of not being in school? Most of all, my dilemma was what is the fate of my baby?

One Baby Nap at a Time

Eventually, I decided to bring my son Nouman while he just turned 7 months old. Wait, what? A grad school for a newly mom? Like all other human endevaours, it is hard, but doable. My baby became my inspiration. He reminds me so much that I need to succeed. That I can’t deviate from my end goal of getting a Master’s Degree in Economics. Seeing his face so peaceful and in bliss while nursing is a trade off for my lack of sleep. Nursing time and him beckoning me was my hardest weakness.

Regardless, I did my studying one baby nap at a time. There will always be one of those days of feeling blue when juggling the two. As many activities here involve time constraints, trying to shrink the overwhelming into what seems possible is the only way I go through it with ease – and sane. Additionally, support system also helps. I am thankful for the full support my husband has for me and my studies. Knowing that each day we are incorporated in the prayers of our families, is also a good source of motivation. Having a baby while in college, allows me to focus my spare time in doing the things that are only worth doing. It helps me embrace and cherish our time together while enjoying the perks of living a first world country.

The journey doesn’t end after passing the arrival gate. It never ends at all in that matter. There is a notion that says, “Once you’re a fulbrighter you’ll always be a fulbrighter” is very true. It’s the start of life changing student exchange experience and having my family present, personally was definitely worth the challenge. Being a grad school mom is just something I leap myself into, then slowly work it out and let God pave the way.

A Message For You

I insist you in keepin 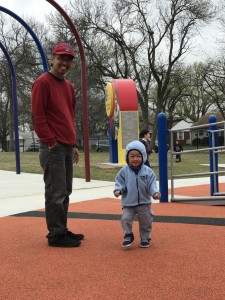 g your dreams alive. Go study abroad as far as America. Even if you have to go back to school again while having a baby. Have a buddy system, or say aloud your goals so you stay committed. It’s common to get caught up in time loopholes filled with routines that are familiar and easy. However, by stepping out to the challenge will not only allow you to find yourself, but also enrich the lives of others that you connect with. Additionally, it will also open you up to amazing experiences that you might not get otherwise. Since then, the phase of my scholarship endeavour was definitely one of my happy thoughts. Thus I am compelled to share it with you. If I can do it, so can you.

Photos are provided from the author and from Flickr.