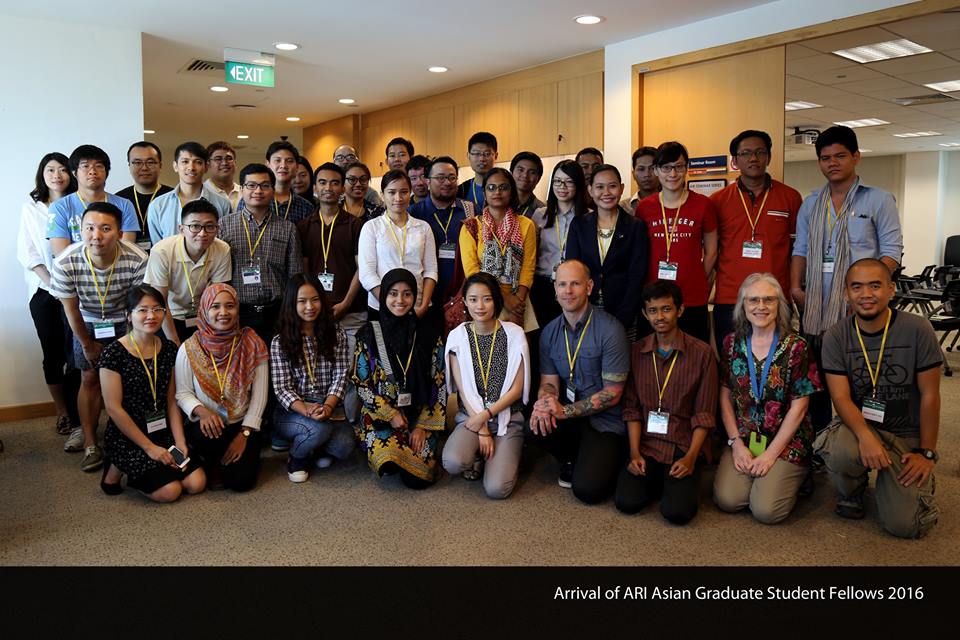 Anytime you work on your paper, it is better if you come up with an idea around you, something happens to you and nearby you, or even any issue you are deeply interested in. This is what Farihatul is going to address in this sharing platform, talking about her ‘academic adventure’, the tips and the wonderful outcome of it.

Well, I start with a narrative of the Institution where I come from, Religious and Cross – cultural Studies (CRCS) is a Postgraduate program in Gadjah Mada University, Yogyakarta, the major I took for my master degree in 2014. Previously I studied English Literature at Sunan Kalijaga State Islamic University in 2010 at the same city. This program is the only interdisciplinary academic program focusing on religious studies at a non – religiously affiliated university in Indonesia (www.crcs.ugm.ac.id). The academic work of the center concerns with three main areas of study: (1) Interreligious relations; (2) religion, culture and nature; (3) a contemporary issue of religion and public life. For the significant information, there are many scholarships available in this International program and fortunately I was one of the students who got this academic grant. At the beginning of the study, the students are required to choose one of these areas that will be oriented to the final project of study (thesis). In line with me, I picked the third area due to my interest on a contemporary study for an account of my research field. 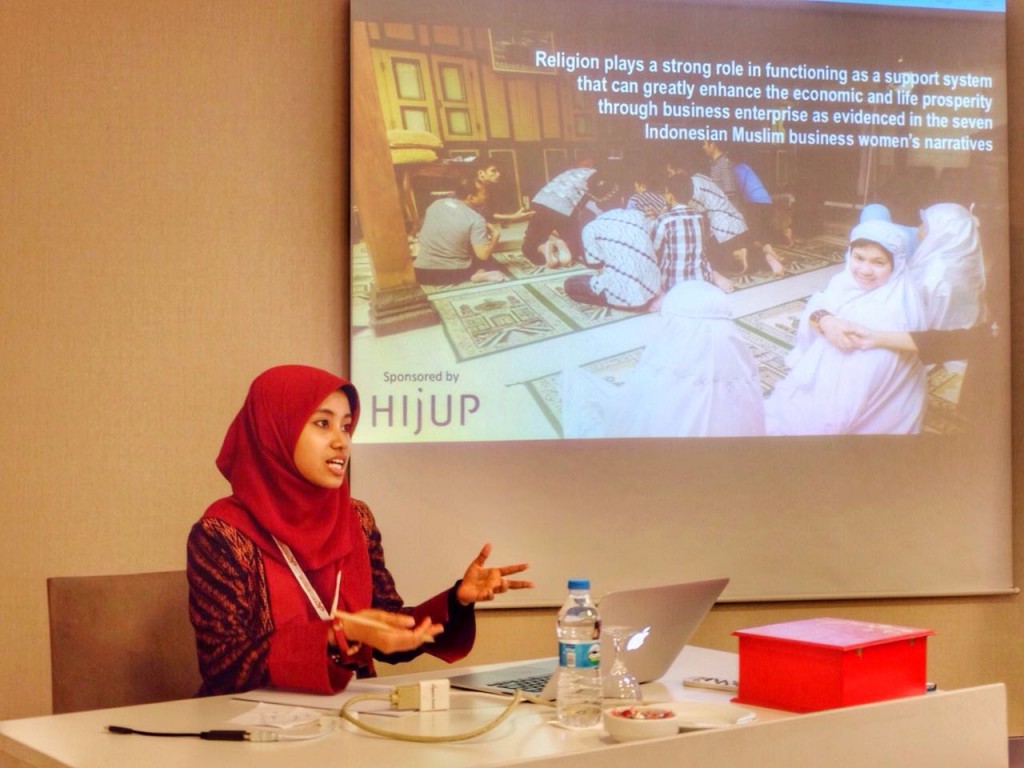 Taking the area of religion and public life is about the notion to put my interest into the academic record. Historically, I have been working on entrepreneurship for approximately four years and I do like updating any kind of issues relating to it, especially when it connects to religious issue. I do also concern with interfaith and inter-religious discourse. Chronologically, I had some experiences related to fundraising and social program when I was at my bachelor degree and those led me to create my own entrepreneurial project namely EtniQo Indonesia afterward. I also participate in some entrepreneurial communities at the regional, national and even international level. This background helps me to come up with the intersection between entrepreneurship and religion and their dynamic interplay between one and another. This idea reflects on two particular communities called Jogja Muslimah Preneur (JMP) at the local level and Tangan Di Atas (TDA) community, especially the establishment of TDA Woman at the national level in which both of them have almost a similar concern about religious orientation, women’s play on gender issue and entrepreneurial movement. Hence, these three subjects constitute the theme for my final academic assignment, a master’s thesis.

In Indonesia; Plan the Research, Work hard and Get the reward.

One feed that I always put into my mind before I start my research trip; it is a professional work. I keep reminding myself to be total in the process and its accomplishment because I believe in the law of balance. For me, the more I put an effort for anything, the more I gain and greater feedback I get then. Again, doing a project is about dealing with a target. I have drawn these commitments before I begin the starting point. This positive initiation had given me a great opportunity at the first line of my research plan. At the end of my third semester, I got an information about Asian Graduate Student Fellowship (AGSF) held by Asia Research Institute (ARI), National University of Singapore (NUS). It is an annual academic program for postgraduate students who are working in the Humanities and Social Sciences on Asian topics. This fellowship is potential and beneficial program for academicians, especially those who are starting to write a thesis, to get an effective guidance and insight for their research improvement and also a platform to increase the skill of English academic writing. ARI also provides a research mentor for each of the fellows who has a similar study to have some private consultations during the program. This fellowship takes two months of duration which ends at the Singapore Graduate Forum on Southeast Asian Studies as the peak of the program in which the students are required to give a final presentation of their research at the conference.

Lucky me! I became one of thirty four participants coming from Asian regions and USA that were selected to be a research fellow in 2016 starting from May to July. In the registration process, there are three important requirements that become the main considerations and evaluations: they are a short research proposal, an application form and two significant recommendation letters from thesis advisor or lecturer. Make sure we have aligned topic cluster with the institution. In my cluster, I am included in the cluster religion and globalization as well as gender issue and its development. You can check out the official website (ari.nus.edu.sg) about the clusters offered by this program. For a strong reason, this announcement supports me to do my field work passionately and effectively during three months before my departure to Singapore.

“Women, Islam and Economic Activity: Examining the Religious Ethics of Muslim Business Women in Indonesia” is the topic for my thesis. Taking women as subject of research as the reflection of my own experience and the communities I am affiliated in, choosing Islam as a religious institution as the frame of religiosity and deciding economic activity as the form of entrepreneurship application are all based on what I am in and my surrounding. In the realization, I chose seven women respondents as the informants who mostly come from my entrepreneurial community and others from my network. Some of you might be familiar with the name on this list, they are (1) Diajeng Lestari as the owner of e – commerce HijUp.com, (2) Iffa M Dewi as the owner of Sogan Batik Rejodani, (3) Anik Siti as the owner of Waroeng Group Steak and Shake, (4) Atika Kurnia Sari as the owner of Mangrove Printing, (5) Nur Arifah as the owner of Pusat Busana Muslim Neana Brand, (6) Restyana Widya Putri as the owner of Kuki Bakery and (7) Sri Budi Rohani as the owner of Mina Swalayan. As the fact, it was not a piece of cake to contact and offer these great women to be my research subject. Some difficulties and rejections befell me often but I had prepared some alternatives to overcome this problem. Even some of them were not on the list of first plan but these seven women confirmed and supported my initiation. All of them were there because of the power of network and relation.

Between library research and field research? I prefer to pick the second one. For me, a field research directs me to touch down some new places, to meet new people and to find some unpredictable thoughts through interview sections. My thesis required me to go travelling around Java (Yogyakarta, Bantul, Sleman, Purworejo) and Jakarta for many times. Seven respondents resided in seven different places. Of course, I need not only good health to travel around those places or fresh idea to do research but also a strong financial matter. Many things I did for the sake of completing my facility and requirement of research. At that moment, I was thinking and being confident that the good effort would be paid off. In my view, the effort that was all-out, the time that was used and the money that was spent are a kind of great investment for the future. We might not get them back today or tomorrow but keep a trust that someday these will grant the feedback.

In January 2016, I began my field work and it ended at the beginning of April 2016, two weeks before I left for Singapore. Because I chose a field research which applied a participatory observation and a semi – structural interview type, I had to go many times to the companies of these seven Muslim business women to get the data on how these respondents generating Islam including its value and teaching into their company principles, enterprise management and business transformation. The significant issue that I raise up is the case of spiritual company. I define this concept as another model of enterprise design which exclusively brings religious substances in its operation. In specific analysis, I explore the research on how these women utilize the Islamic ethics and its religiosity into the business operation for the orientation of inspiration and success. Another concern is analyzing a conceptual debate on how Western perspectives see religion in the context of Protestant ethics and the spirit of capitalism by Max Weber into the account of comparative discourse with these Muslim business women in Indonesia. Though I often encounter with such kind of confusing moments and exhausting conditions, I still have so much motivation and spirit to complete this mission. It is because of my keen interest on that area and a kind of passion I have, back to the primary rule as I said at the beginning of the narration!