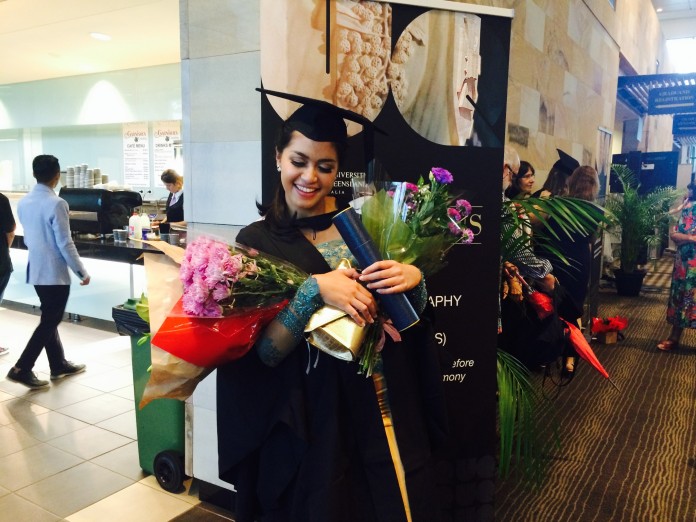 In the second part of her article, Savira Ralie shares her experience in combatting homesickness, her favourite part of living in Brisbane and how she managed to make the most out of her double degree program in Queensland, Australia.

In order to survive homesick, I decided to join Indonesian students’ communities. I got into Indonesian Students Association of Queensland and served as a committee member of the External Relations division. I also joined Saman (traditional dance from Aceh) community and performed at some places, mostly at Indonesian events. I also completed an internship program at Garuda Indonesia’s office. I did everything just to make myself feel, or at least close to, home.

Also, I made the most out of my time in Brisbane by exploring every corner of my new home for one and a half year. I usually took a bus or a CityCat for my daily commute. CityCat is a ferry that travels around the river (Brisbane is known for its picturesque, long, deep river) and stops at one port to another. CityCat is one of Brisbane’s trademarks and an excellent example of maximization of public facility to boost tourism. Brisbane’s authority introduces its beautiful scenery to visitors by making ferry one of its transportation systems.

In order to take public transportation, you need to have a Go Card. It’s a card equipped with credits that can be used as a payment method for bus, CityCat, or train. Only a tap away and you are on your way. You need to top-up your Go Card every now and then (depending on how frequent the usage is) as it won’t function if it runs out of balance. I used it almost every day to campus and other places during my day-off and tried to always do a quick top-up before boarding the facility. You can ask the bus driver to top-up your card while you’re in the bus or ask the CityCat staff during your CityCat ride and also utilize the top up machine at the train station. You can also use cash to pay for the ride but Go Card is much preferred as students will get a few percent off.

Brisbane feels like heaven for students as the city highly prioritizes us. Everything is on discount when you are a student. As if Brisbane’s community understands that students have to struggle with school so they don’t want you to struggle with your pocket too (or eventually begin losing your mind over it).

Campus-wise, I really admire the library’s 24 hour policy. Students can spend the night or two during finals at some of the university’s libraries. I never spent a night but stayed until three o’clock in the morning for a few times. I walked home by myself and no harm was done. The campus area was safe and calm. The library was civilized and neat, comfortable enough for students to come in pajamas, ready for a ‘sleepover’.

The courses I took had diverse levels of difficulties. However, since international class of UI used English as its official teaching language during our studies in Indonesia, language was thankfully not a barrier. I communicated almost easily with lecturers or fellow colleagues, though there were times I failed to understand their thick Australian accent. I was told that it is OK to ask locals to repeat their words during conversation as they are aware that their accent is sometimes hard to follow. I did say ‘pardon me?’ a million times during the first few months.

The culture in Brisbane is also another thing I was really fond of. People show high appreciation towards arts. You can find art centers and museums around the city as well as suburbs. The buildings are high and historical. They have a massive art theater in the middle of the city and I went there a couple of times to see Broadway-like plays. However, when it comes to hospitality, Indonesia still tops my list as the country with the friendliest locals and neighborhood. Brisbane’s locals may seem rude as they speak harshly, especially bus drivers. Some of them rarely smile and often prefer straightforward conversation. I tried not to take it personally since every place has its own characteristics, including its citizens.

Although filled with great scenery, Brisbane has not much to offer when it comes to entertainment, unlike Jakarta my hometown. Personally, it was not a problem as I preferred nature anyway. I often went outside the city with friend right after weeks of putting our brains on fire. Sunshine Coast, Gold Coast and Byron Bay are some of the few places I visited where one can find great beaches. Only one to two hours distance by train or car.

The other thing I miss the most about Brisbane is just the significant sense of individualism. People don’t put much attention on you. You are free to express yourself and there will be no judgment. I figured carelessness can sometimes bring positive impacts. It gives you space to find your inner-self without worrying that every single move is observed or analyzed by people. It surely gave me a break and served as the perfect escape from the culture that existed in Jakarta.

Months and obstacles passed by and I finally graduated from the University of Queensland on December 2014 (and went home not long after to prepare for University of Indonesia’s graduation on February 2015). I got once-in-a-lifetime opportunity to deliver valedictory speech at the ceremony. It was a total heartfelt moment seeing my father and the whole family sat at the front, watching me as I blurted out inspirational quotes and words of encouragement. Being a valedictorian was definitely the cherry on top of my college years. I heard from one of the teaching staff at University of Indonesia that the university still plays my speech video at dual-degree program events. Though super embarrassing, I did prove to people that dual-degree program students actually work hard.

I have to admit that studying overseas is indeed challenging. I had a hard time dealing with the homesick and culture shock. Fortunately, it only lasted for a few months, although it may be different for each individuals. However, if you work and push yourself hard enough, I promise it will all be worth it in the end. Someone told me that once you live overseas, you would come back as a different person. Definitely in a good way. You will have your old personality being replaced with a better, updated version. I am no longer a girl with simple ambitions; my ambitions are now ranging from wanting to build a school for less-fortunate children to creating an environmentally-friendly business.

There are many ways to study overseas and University of Indonesia’s dual-degree program is just one of them. Pricier than other programs provided by the campus, but again (I will never get tired of saying this), it will all be worth it in the end. It’s not just about getting two titles and diplomas. Being a hundred kilometers away from your loved ones is never an easy task to conquer. However, it will surely challenge you to be more independent, to be more responsible of your needs and wants, to increase your survival skills and most importantly, to be more aware of your true self. A priceless and life changing experience, for sure. If I have the chance to repeat everything all over again, I will do it in a heartbeat.

I am going to close the article with a little piece of advice, or a sincere dare as written on my valedictory speech dedicated to all graduates. I dedicate this to all readers: I dare you to reach for the sky, ask the universe for everything you want to be in life and by the end of the day I wish you the courage to open the roof and finally fly over your limits.