Hong Kong is one of the heavily affected countries by COVID-19. Fabian, a PhD student from Hong Kong would like to share his personal experiences and observation on how it affects the Indonesian workers and communities there.

Hi everyone! I am Fabian, an Indonesian PhD student from The Chinese University of Hong Kong (CUHK). Living in one of the most densely populated cities in Asia during this volatile period gave me such a farfetched experience. Began with the weekly battle for democracy on the streets of the city since June 2019, the sudden hit of COVID-19 pandemic has brought people’s outcry to a completely different narrative. It might not surprise you how resilient Hong Kong is during this pandemic. But how about the Indonesians who live in Hong Kong are affected by this pandemic?

“In the midst of chaos, there is also opportunity” ― Sun-Tzu, The Art of War

Since you might have been bored by reading depressing news about COVID-19 from all over the world, I am starting off with a quote from one of the Chinese Seven Military Classics. Not every country (or city, in this case) has the ability and opportunity to learn from a tragedy and transform both its government and people into a more resilient community, but Hong Kong is not one of them. Learning from the trauma of an outbreak of severe acute respiratory syndrome (SARS) in 2003, I have experienced how the Hong Kong government is relatively ready for this new COVID-19 pandemic. Despite the inexplicable political relation with mainland China, the Hong Kong government responded more quickly after thousands of health care workers staged a strike to urge the authorities. They demanded the authorities to close most of its border control points and to implement a mandatory 14-day quarantine for all people arriving from the mainland in early February. People were told to wear a mask in public, non-emergency or non-essential public services workers were told to work from home, schools and universities were suspended, quarantine facilities were established, while the frequency of public transportations were reduced for more than a month until the second week of March. The authorities also published a geodatabase, that could be easily accessed by people to update the latest situation in the city.

In early February, panic buying was sparked among the people, making a shortage of daily supplies and sanitary products, including masks and hand sanitizers. I once had to send several boxes of masks and hand sanitizers from Indonesia and distribute it to other Indonesian students. However, authorities responded quickly. The city’s supply was recovered in a week. During this time, I realized that the awareness level of the people was fascinating. Although the culture needed a couple of weeks to be fully implemented, they started to wear mask, apply physical distancing, avoid unimportant public meetings (open bars during the weekend were still a bit crowded, though 😊), cancel their travelling plans, and work from home. Oh, this reminds me to go back to the Indonesian citizen community in Hong Kong!

During this pandemic, every Indonesian community is affected, but the most affected are students and migrant workers. For students, after last semester our school year was shortened because of the continuing demonstration. This semester, the university is conducting online teaching and learning activities until the end of this semester, including the graduation ceremony. Several study majors that require laboratory activities are pushed to cancel the course, while some student bodies are objecting for a reduction in school fees. Since the beginning of this semester, 80% of the Indonesian students postponed their leaving to Hong Kong after the winter holiday, only us the PhD students, whose research activity is not much different, remained to stay in Hong Kong. Most of us are not allowed to enter our offices or laboratories and need to work from home.

Although the termination rate is much lower in Hong Kong both for professionals and foreign domestic workers, the migrant workers are still heavily affected during this pandemic. The Hong Kong government, through the Labour Department, appealed that migrant workers should stay at home even on holidays to reduce the infection risk of the COVID-19. Issues were sparked when a lot of foreign domestic workers complained about this appeal, due to employers were still asking them to work when they remained at home during holidays. However, the authorities quickly responded by sending an announcement to the employers. Nowadays, especially during the weekend, the number of domestic workers who spend their holiday in communal spaces such as Victoria Park, or Tamar Park, is much less than what we used to see a couple of months ago due to this new regulation. Nevertheless, the Indonesian communities together with the Consulate General of Republic of Indonesia in Hong Kong (KJRI-HK) are helping each other to make a safer environment for our diaspora.

When this article was written on April 8th, 2020, Hong Kong had 961 confirmed cases with 4 casualties, 667 people hospitalized, and 264 patients recovered. From those cases, 60% were imported cases, meaning it was carried by someone who just travelled outside the city, leaving 40% cases listed as local case. These numbers are proving that overestimated measurements such as limiting people’s movement between cities, banning gatherings of more than 4 people, applying home quarantine, and testing more people for COVID-19 are necessary.

Generally, I personally feel that Hong Kong is much safer than many cities or city-countries around the globe, even compared to cities in Indonesia. Although they have been hit by a non-stop demonstration for the past 9 months, the people and government seemed to understand each other on which issues they are opposing each other, and which one they should be working together, such as COVID-19 pandemic. While many academicians were opposing the authorities during the demonstration, scientists and researchers from universities are heavily involved in the authorities’ COVID-19 mitigation scheme. Other than that, people are also becoming more vigilant and mindful of others to obey the physical distancing rules.

At last, I could only wish that all Indonesian citizens in Hong Kong and back in Indonesia are staying together during this hard time by looking after each other and put the common interest first, while forgetting all the differences that we have. I also would like to ask you to start doing a small thing, to help our government, families and friends back in Indonesia, by wisely using your social media. Send only positive and clarified news without being accompanied by expressions of hatred. Because I believe that amid the chaos, there is also an opportunity for us to learn to be a better person and society. 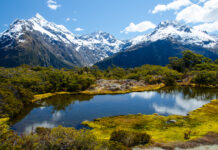