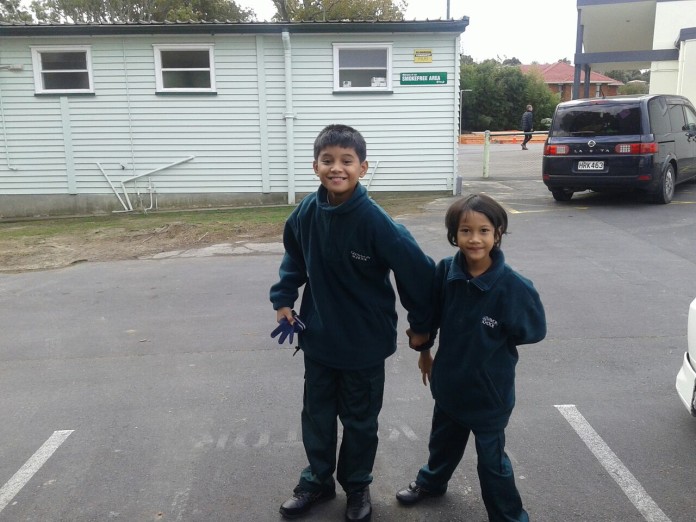 Lavinia Disa interviewed Nantan and Divya, two children of a PhD student at The University of Auckland, about their life and education experience overseas when accompanying their parents who also study overseas. This article is very beneficial particularly for parents who plan to bring their children overseas.

During my Master’s study in Auckland, I occasionally taught Indonesian folk songs to Indonesian kids as an extracurricular activity. Among these kids were Nantan and Divya, two children of Tatum Syarifah Adiningrum, a PhD student in Education at The University of Auckland back then, now a graduate.

While I have been familiar with stories of parents who bring together their family overseas, I was intrigued to learn how their children feel when they have to leave Indonesia for a foreign land. Nantan and Divya shared with me what they thought during the years of their stay in Adelaide and Auckland.

Studying overseas is not something new for Nantan, who moved to Adelaide, Australia, at a very young age of 3 to accompany his mother pursuing a Master’s degree. Being only a toddler at that time, Nantan couldn’t recall his day-to-day activities. “But I do remember how I would cry whenever my mom went to her campus, and I would stay at a childcare center for some hours,” he said.

By the time he moved to Auckland, Nantan was 11 years old and enrolled in Glenavon School as a Grade 6 student, although he was supposedly still a Grade 5 pupil. In New Zealand, the regulation sets that students aged 12 years have to begin intermediate education at Grade 7. He studied at Glenavon School for almost a year (semester 3-4), with classmates mostly of Pacific origins, such as Samoa and Fiji, while others were the European Kiwis. He was the only Indonesian.

Nantan admitted that he experienced culture shock when he first arrived, especially because halal food was not easily found around. He also noticed some cultural differences. For example, if he wanted to hang out with his school friends, he couldn’t just come to their house and knock on the door, like commonly done in Indonesia.

On the bright side, Nantan liked his school quite much. At school, he studied Maori Language, Math, and English (Reading and Writing). His favorite subject was Writing. Usually, his teacher would assign a topic and a genre (e.g., explanatory and narrative writing), and the students had to finish a piece of writing in 2-3 weeks. “My score for Writing was always among the highest in my class,” he remarked.

Nantan noted how different the lessons taught to students between New Zealand and Indonesia. Take Math as an example. In Indonesia, students would memorize formulas, while in New Zealand, the teachers emphasized more on logics and problem-solving skills.

Moreover, in his English class in Auckland, reading was a central activity. Students would be divided into groups and assigned some reading materials consisting of stories and articles from specially designed modules. After reading, they would identify the grammatical features of the texts and discuss and summarize the contents. The readings would then be rotated across groups. This group learning turned out to be very pleasant for Nantan.

One unique feature of Glenavon School’s curriculum was its thematic learning. In each semester, students would do focused activities related to a chosen theme. For instance, the theme for semester 4 was “building,” and his teachers set up an overarching miniature-building project called “Glen Avon Village.” Nantan and his friends individually created a miniature house from carton boxes. They worked on this for one classroom hour every day. At the end of the project, students’ works were showcased to parents.

Unfortunately, when he went to Blockhouse Bay Intermediate for two years, fun thematic learning was not part of the curriculum. For Nantan, almost everything about his junior high school was different from his elementary school. With more students in a class dominated by Indian and Chinese pupils, he sensed that the learning atmosphere was very competitive. His new school uses a “star” system, which rewarded a good academic performance with a star badge. Nantan commented, “It seems that the more stars you have, the more superior you are. Once I tried to be as competitive as them, but I ended up feeling depressed. So I just tried my best, instead of trying hard.”

But every cloud has a silver lining. He met a very close friend from America, with whom he is still in contact now. He joined the compulsory extracurricular activities called the “Gifted ‘N Talented” (GNT) program every Friday and managed to learn Chinese Culture and Arts, Coding, and the making of the School Yearbook. One of the most memorable events for him was the annual camp, in which he participated for a week in Ngaruawahia. There he was doing so many exciting games, such as rafting, canoeing, paintball, trampoline, trekking, and animal hunting.

Nantan spent around four years in Auckland and went back to Indonesia in 2018, currently a Grade 11 student. Though he is grateful for being back home, he still misses Auckland from time to time. “I really miss the serenity, cleanliness, and cool temperature of the city. I also love how people there are not judgmental and more inclusive,” Nantan said.

Divya Dhanika Dharmesti: The Australian ‘souvenir’ who made good friends in Auckland

Unlike Nantan who experienced education in two countries, Divya only had it in Auckland. Indeed, she spent some time in Adelaide but only as a baby, shortly after birth (her mother referred to her as “an Australian souvenir”).

Upon her arrival in Auckland, Divya was already seven years old and enrolled in Glenavon School as a Grade 3 student. She remembered having around 25 classmates, mostly from Samoa, Tonga, and other Pacific countries and none from Indonesia other than herself.

When she first started school, she was a bit nervous as she had not been that fluent in speaking in English. Divya added, “Though I was nervous, I liked the school as the subjects were much easier than what I learned in Indonesia.” In fact, Divya’s uneasiness happened on Day 1 only. Starting from the second day of school, she had enjoyed studying there. She complimented her school’s wide area, the kind and creative teachers, and the friends she was close to. She even established an all-female gang, with whom she would play role plays, tag, and hide-and-seek at the school playground.

At Glenavon School, she would go to school from 8 a.m. to 3 p.m. Among the subjects she learned were Reading, Writing, and Math. Similar to her brother, Writing was her favorite subject as she deemed it the easiest. Other than that, she favored studying in Auckland over Indonesia because there was no homework or exam in particular (except for spelling and writing). This fact was clarified by her mother, who explained that final exams did exist but were presented as formative tests.

With no pile of assignments brought home, Divya could spare her time at the Blockhouse Bay Library after school. She would read novels or join fun games, such as finding items in the library. Arranged by her mother, she also took a private course on sewing in her neighborhood. Sometimes, Divya would join her mother in barbeque parties with other Indonesian students.

“I’m really glad to have studied in Auckland as I’ve got so much experience there and met good friends. I miss that place so much,” Divya told me. Now she has been back to Indonesia and is about to start her intermediate education.

Aside from studying and spending time with their family, Nantan and Divya took part in various activities with other Indonesians, for example, performing with Swara Nusantara and playing gamelan for the opening of the Indonesia Center at Auckland University of Technology. When I asked Nantan if he was happy participating in cultural events, he said, “Of course I was! I’m so proud because I was representing my culture.”

I believe that their experiences mirror how other Indonesian children feel when they live overseas temporarily to support their parents’ study. Surely these kids are very lucky to have learned about cultural identities from such a young age.