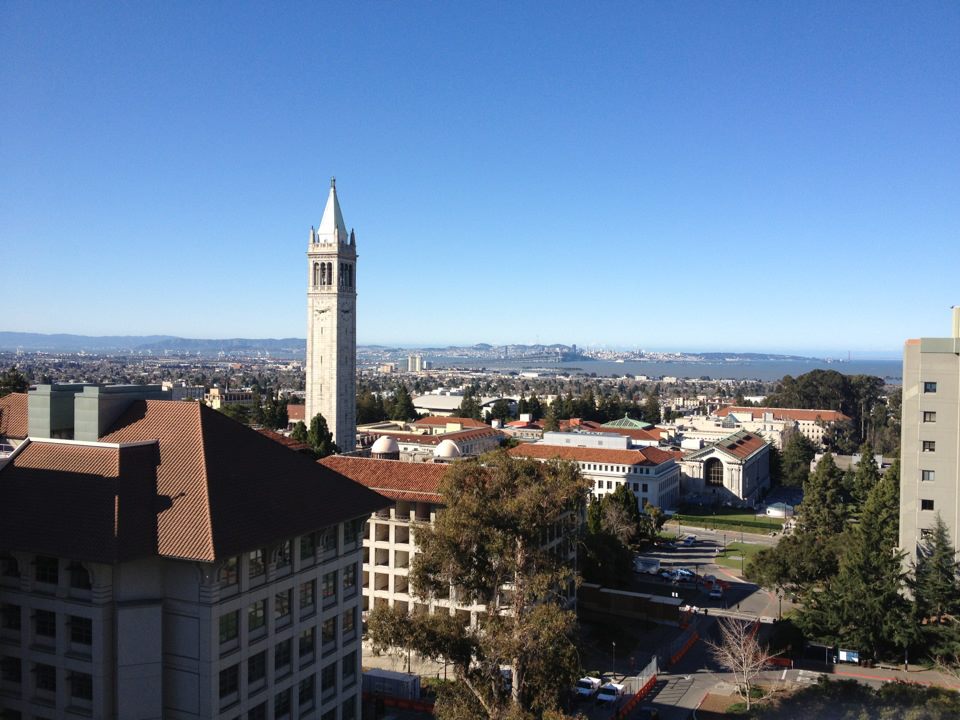 Sather Tower (also known as the Campanile), located in the center of UC Berkeley campus, stands 307 feet tall and is the third tallest bell and clock-tower in the world.

Skeletons of a Tyrannosaurus rex and a Pteranodon are stored in the Valley Life Sciences Building, one of the numerous biological sciences building on UC Berkeley’s campus.

Soemitro Djojohadikoesoemo, Widjojo Nitisastro, Ali Wardhana and Emil Salim, some of the most influential Indonesian economists, graduated from UC Berkeley and are collectively referred to as the Berkeley Mafia.

These are only a few fun facts about Berkeley; there are many more you can Google if you are interested in finding more. Now, let’s get started talking about the Berkeley college experience.

College is a life-changing experience for everybody ranging from the greenes freshmen to transfer students or reentry students more seasoned with life and professional experiences. It not only forces you to get out of your comfort zone, but also presents you with a world waiting to be explored and many choices for your future. I started out as a junior transfer at the University of California at Berkeley (also known simply as “Cal”). I was able to spend a splendid 2.5 years there, and from my experiences I think it’s not hyperbole to say that Cal is infinitely more than a life-changing playground. Cal and its centuries of tradition represent a cornucopia of excellent academics, world-class innovative research, cultural activism, and art.

Just like other universities, it’s the bright and passionate people that you see on campus every day that really make the wheels of tradition of excellence turn. As perfectly described in its official motto: “Fiat Lux: Let there be light,” Cal aims to “illuminate” the students’ path to achieve their highest potentials. Students can learn a lot about engineering, physics, economics, ethnic studies or just about any other major from superb professors in Cal’s top-notch 350 degree programs. As a student, one can undertake his/her senior thesis under the guidance of a Nobel Laureate or take Chemistry course in the same building where berkelium and californium were first synthesized. This tradition of excellence definitely comes with a price, though. The pace of study is fast, and sometimes ruthless, like drinking through a fire-hose. Fellow students are competitive, but in a healthy way, and students are usually keen to help others. Discussion sessions, professors’ and TA’s office hours, tutoring sessions, as well as the vast library space and collection (32 libraries total sprinkled across campus) provide a conducive environment to push yourself forward and reach beyond your expectations.

Not only do you learn from the lectures and seminars, you also learn by directly applying what you have been taught in class for solving real world problem through research and projects. For example, having taken Stem Cell and Molecular Immunology, I had the opportunity to apply the knowledge gained from there and other classes to figure out how manipulating parts of the immune system can lead to rejuvenation of the aging muscle stem cell microenvironment, facilitating muscle regeneration in the old. Most of Cal students do research or projects in one-way or another. There are many research program that can help you get started, not only giving you class credits but also stipends. Some of these include the Undergraduate Research Apprentice Program (URAP), the Haas Scholars Program, and the Biology Fellows Program, to name a few. Furthermore, the boundary of the campus is no limit to where you can learn. Cal students can also do research in the surrounding hospitals and research institutions such as University of California at San Francisco (UCSF) hospital, Children’s Hospital & Research Center, Oakland and Lawrence Berkeley National Laboratory, or take classes in University of California at Davis and UCSF. You can even venture farther through exchange programs, summer courses, and internships all over the United States as well as the world.

At first, coming to Cal can be overwhelming. The magnitude of the student body (both in number and diversity) can be both a blessing and a curse. It can be intimidating to be in a class of 200+ people, but it also opens many doors. From the huge and varied student body, chances are you can find life-long friends, business partners, or even future significant others. It gives you vast possibilities for the direction of your life. But once again you have to make an effort! For example, in a big class, you have to try harder to get to know your professor and to make sure they know you as more than a mere number (especially if you will need their reference). There are over 1000 student groups on campus (you can even easily make your own if you can’t find one that matches your interest), which once again echoes the diversity of the student body. This brings up a facet of Cal that has made it unique and singled out from other universities; its liberalism. Liberalism is a notion that everybody has a right to life, liberty, and the pursuit happiness. Cal has been perceived by many as the most liberal campus in the United States, and most likely the world. It was the birthplace of the Free Speech Movement, a pivotal civil liberties movement that took place in the US in the 1960s. Furthermore, Cal students are heavily involved in serving the community as shown by their immense participation in Teach for America and the Peace Corps. You can also teach to the community and to your peers about what you have learned through DeCal (Democratic Education at Cal). Some of the classes offered are quite unique: “Harry Potter and the Chamber of Analysis”, “The Simpsons’ and Philosophy” and “James Bond: Politics, Pop Culture, Hero.”

Additionally, Cal’s liberalism is embodied in the City of Berkeley, which Cal calls home. One of the liveliest sections of the city is Telegraph Avenue, which starts from Cal’s Sproul Plaza and extends south from Bancroft Way to Dwight Way. It boasts many restaurants, apartments, independent bookstores, and clothing shops, as well as street vendors on the sidewalks offering henna tattoos and hippie T-shirts. This atmosphere has attracted a diverse group of people frequenting the area: tourists, college students, artists, activists, homeless people, as well as eccentrics. Yet, if you prefer a more laid-back and tranquil place to live, Gourmet Ghetto and the area north of the campus represents a great choice. There are many dining options in Berkeley (Indonesian, Ethiopian, Korean, French, anything you can name) and, if you have time over the weekend, San Francisco is only 30-minute away by BART (Bay Area Rapid Transit). This can take you from Downtown Berkeley station straight into the heart of the city. For people who love the outdoors, Berkeley is also ideal, since the weather remains mild throughout the year (no snow in Berkeley!), with many outdoor green spaces including Strawberry Canyon and Tilden Park.

Besides the arduous academic life, students also play very hard during their golden years at Cal. They are very passionate in supporting Cal sports teams, especially football. One of the biggest traditions in Cal is its rivalry with Stanford, and every year the football match between Cal and Stanford is called the “Big Game.” When the game is held in Stanford, there will be a Bonfire Rally at the Greek Theater the night before the game in which Acapella groups perform “Stanfurd”-ridiculing songs and the biggest bonfire west of Mississippi is lit (Berkeley 101, lesson 1:  Don’t wear RED to the Big Game – or during Big Game week, for that matter – you might get an F from your professors, especially in the College of Engineering!). Another tradition, which might raise a lot of eyebrows, is the Naked Run in the Gardner Main Stacks. The Naked Run, as its name implies, is a tradition at Cal during the RRR week (1 week before finals when no classes are held). Students, mostly who live in university owned co-operative housing, gather in the main library, strip down, and proceed to run through the crowded library. These represent just a few of the traditions to be found at Berkeley.

It bears mentioning that Cal only “illuminates.” It does not meticulously walk students all the way. This brings up one of the best things about Cal: it rewards the students proportionally to what they put into their learning and exploration. Opportunities and scholarships are abundant for the chasers but if you wait to be catered to or spoon-fed, you will have a very bad time. You might have free time if you only take classes, but it fills itself up quickly and effortlessly. The hardest part is when you have to make a choice; there are just so many options, that sometimes I still want to go back to pick up what I have missed. There is a lot of life and energy at UC Berkeley, and if you put in a little effort you can learn a lot about it. Ultimately, Cal aims to provide its students with a well-rounded experience, and it delivers beautifully if the students are willing to do their fair share. GO BEARS!!!