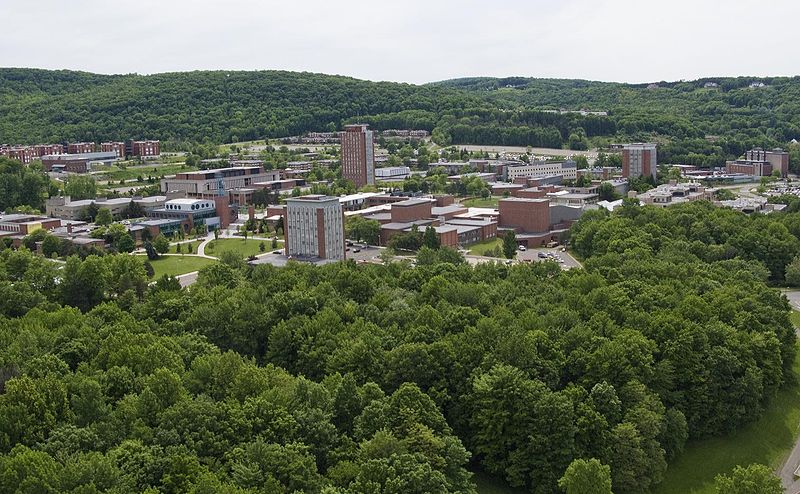 “Binghamton? Where is that?” this question is probably the number one most common response I received when I tell people about the university where I received my undergraduate degree.

To tell you a little bit more about Binghamton University, here are some more questions I am usually asked about my alma mater:

What is Binghamton and where is it?

Binghamton University is short for the State University of New York at Binghamton, also known by the locals and alums as “Bing”, a public university that is located in the city of Binghamton of upstate New York, U.S.A. The research-based university offers undergraduate up through doctoral degree programs. Binghamton is part of the larger SUNY system, which also include other major universities such as University at Buffalo and SUNY Stony Brook. Like other SUNYs, Binghamton is a great academic and knowledge hub – Binghamton has in fact been called as the ‘public ivy’ by Howard and Matthew Greene in The Public Ivies: America’s Flagship Public Universities (2001). It is also perfectly located in the southern central part of the New York state — about three hours drive from New York City and one to two hours drive to other major college towns in the area such as Ithaca, home of Cornell University, and Syracuse, home of Syracuse University.

Why did you choose Binghamton?
Binghamton was the school of my first choice to pursue my undergraduate degree in the U.S. Location played a huge part of my initial interest in attending Binghamton. My first and primary reason at the time was because I wanted to find a university in the New York state area. I was in love with the “Empire State” but did not want to go to college in the New York City area (where I spent my high school years) or any other large cities in the state. I also wanted to live in a greener and “fresher” environment, away from the pollution and crowdedness of the city. Hence, Binghamton as a city was the perfect size for me to focus on my first university degree — although the university itself has about 15,000 students and a 1.57 km2 wide campus area, which is huge! It has an extremely wide area of nature reserve, which is pretty much an untouched forest area of the campus where students can enjoy the nature of upstate New York as it is.  At the time, it has the best reputation among all the SUNYs.

And the university lives up to its reputation – as a public university, the institution is strongly linked with the government and thus, provided with supporting learning facilities for both students and faculties.

As a research-based university, it is a great place for students and faculties who have a long-term objective to become researchers and academic experts in their fields. As a Psychology student, I gain a meaningful and life-changing academic and research experience from Binghamton’s Department of Psychology. The department is filled with state-of-the-art facilities for psychology research. The research activities in this department is outstanding. There are laboratories for research in various areas of psychology, including clinical psychology, neuro or brain psychology, social psychology and other many more fields. As a young student who was fully sold on the research achievements of my psychology professors (who are pretty important scholars in their fields), I was involved in three different laboratories throughout college. On that note, Binghamton is definitely a great place to learn for those of you who want to pursue psychology. (Check out the Department of Psychology’s website here).

How does it feel to live in a small town like Binghamton as an international student?

As I first arrived in Binghamton, especially coming from such a big city like Jakarta, I definitely went through culture shock. However, even before I moved to Binghamton, I always wanted to experience the “small town life” in the U.S. – that small white house and white fence neighborhood in America where all the friendly families live as portrayed in movies and TV shows. With the mindset that people in small towns are going to be friendlier than those in big cities, I wasn’t too afraid to meet and make new friends with people from other countries in this area. And again, Binghamton lived up to this friendly small town reputation. My new college friends, who came from diverse cultural backgrounds, were extremely friendly and enthusiastic to learn about Indonesian culture, which was new to many of them. Not only that, the local people of “Bing” town are just lovely and welcoming to international students such as myself.  Many of my international college friends actually had the same reason of choosing Binghamton as their school: to experience a smaller and more ‘peaceful’ college community in the U.S..

Quoting a former Indonesian student of Binghamton University, Ponti Carlofano, thought of his time in Binghamton as “…the experience of knowing and living with people of various backgrounds which taught me a lot — and how we all remain close even after we have left [Binghamton].” (Ponti received his B.S. in Economics in 2012)

And again, Binghamton is only a few hours away from other major college towns, which meant that many of us get to interact with students from Cornell and Syracuse regularly.

Is it hard to get into Binghamton?
As one of the premier public universities in the U.S., it is definitely competitive to get into SUNY Binghamton. It does not mean that you do not have a chance to be accepted to the school — to be accepted into Binghamton University is a privilege. Another awesome perk about Binghamton is its “public university” tuition fee, which means it is very affordable for both local and international students. Additionally, the small city of Binghamton has such a low living cost that makes saving money possible for college students without jeopardizing a comfortable lifestyle.

And yet, it is still a hidden gem…

Not many Indonesian students however know about Binghamton. With its great academic offerings and supportive environment, it should definitely be included in the list of U.S. universities that Indonesian students should consider for their study abroad.

As Fiz Ramdhani — another proud Indonesian alumni of Binghamton — puts it, her most memorable moments in Binghamton were the hard times she went through to find other Indonesians because “we were rare species.” “Blending in is a must. Participate in tons of school activities,” she added, which is a great advice to every new Indonesian student in the states. Fiz actually lived up to her vision to find other Indonesian students in Binghamton, as she went on to become the founding president of PERMIAS Binghamton Chapter and remembered this innovative achievement to “forever be the best, proudest moments of my Bing life.” (Fiz received her B.A. in Sociology and English in 2011)

Binghamton University certainly is in need of more bright Indonesian youths to reveal its hidden gem to Indonesia and the rest of the world!

The following are some additional links to get you more familiarized with Binghamton University and the city of Binghamton: