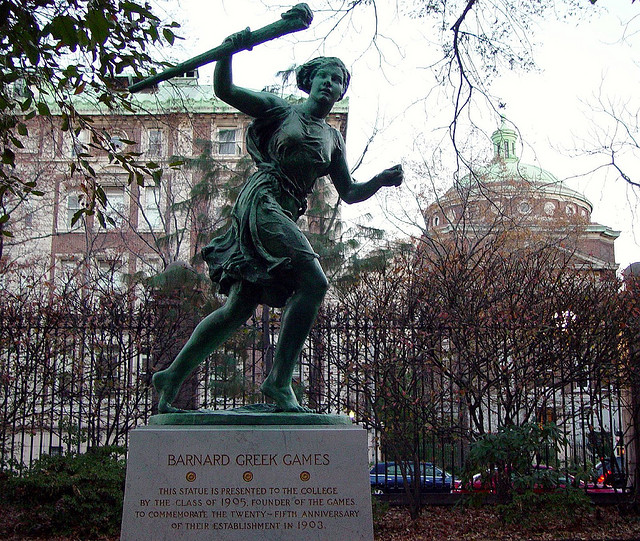 When I tell people I go to Barnard College, many respond with a, “Huh? What school is that?” I proceed to explain that Barnard is the women’s college affiliated to Columbia University in New York. Most would respond to hearing Columbia’s name with a knowing nod, but still accompanied with a somewhat confused look. I can imagine some of the questions floating in their minds – “Those still exist? Why would you ever go to a women’s college in the 21st century, when there are countless co-ed schools to choose from?”

Prior to attending a women’s college, I had a similar perspective. I had not even intended to apply to Barnard, until I literally stumbled upon the school during a college visit to Columbia University. My visit happened to fall on a rainy spring day, which meant that unfortunately there were no campus tours being given. I was bummed – Columbia had been on top of my list – but my mother suggested that we venture across Broadway and take a glimpse at Barnard. Long story short: I ended up applying, got admitted, and decided to enroll. The school turned out to be exactly what I was looking for: a small liberal arts school in an urban setting. I did not factor in the fact that it was a women’s college, though I should have. After my freshman year, I can confidently say that being in a women’s college only made my college experience ever sweeter. Thus, I am here to encourage the girls who are in the process of applying to consider including women’s colleges in your list!

Let me first tackle the most obvious factor why most girls don’t want to enroll in women’s colleges – absolutely no boys. Well, let me share the happy news: students at women’s colleges can definitely still see boys, though perhaps just not as often. Many women’s colleges now are part of a consortium, which means that they are usually associated to co-ed schools. (Students at Wellesley College can take classes at Massachusetts Institute of Technology (M.I.T). Bryn Mawr College students also have the ability to enroll in classes at Swarthmore College, Haverford College and the University of Pennsylvania). Obviously, I cannot speak for students at other women’s colleges, but based upon my own experience being at Barnard, I can definitely testify that you will still get opportunities to meet guys. Barnard and Columbia students take classes together and work in student organizations together.

It is important to remember that women’s colleges today do not aim to isolate its students, but rather to provide them an environment where they can fully develop without the pressure of having to break the glass ceiling. For instance, I truly appreciate being in a class with all female students, though I did not expect to. In high school, I did not realize that I would often feel intimidated by the boys in my class and as a result, would speak less than I could have. Being in a classroom with all girls automatically takes off this pressure, and allows you the freedom to participate more. Studies too have proven that women will speak less when outnumbered by men.

Outside of the classroom, women’s colleges also encourage more of its female students to participate through taking leadership of student organizations, something that would have been male-dominated in co-ed schools. Elizabeth Pffeifer, a Huffington Post contributor and Scripps College undergraduate, testified to this. “I am currently president of two clubs on campus, which I both founded. I also helped to organize a food for thought speaker series for my food politics class and hope to plan more sustainability events on campus in the future. Before coming to Scripps, I never envisioned that I would take on such leadership roles. Maybe I could have done the same at a co-ed campus, but I’m not so sure.”

But do not take me wrong; just because you will not have to compete with other male students does not mean you will not be academically challenged at women’s colleges. Remember, the original women’s colleges were founded for the brightest girls across the country, before they were let into other schools. Let me introduce you to the Seven Sisters, the association of seven women’s colleges in the Northeast – Wellesley College, Bryn Mawr College, Mount Holyoke College, Radcliffe College, Smith College, Vassar College and of course, Barnard College. These schools – excluding Radcliffe, which merged with Harvard, and Vassar, which became a co-ed school – are still regarded as some of the top liberal arts schools in the country. According to a study by the Women’s Colleges Coalition, there are more women’s college graduates than women from co-ed schools who said the reputation of their school helped them get their first job (66% vs. 55%).

I assure you that you will find incredibly bright and hardworking women in any of these colleges, which leads me to my next point. I have friends who want to be doctors, actresses, politicians, engineers, lawyers – the list keeps going. Of course, this is not unique to women’s colleges, for I am sure that the female student population in other co-ed schools is just as diverse. What sets women’s colleges apart, however, is that you form an incredibly tight-knit community with these women, ultimately helping you develop in ways that being in a co-ed school would not. Valerie Saunders, a 40-year-old Smith college grad and owner of a successful photo agency in Jersey City, New Jersey, agrees. “Women’s colleges tend to attract a very competitive and driven student base, and that’s the group you are surrounding yourself with during these critical years,” Saunders said. “That’s where you are developing your work ethic and your first goals as an adult.”

If you can find no other reason to apply to a women’s college, then let me propose my last resort – attend a women’s college simply because you can bring your knowledge of how to empower women, back home. I can testify that being in a women’s college will automatically harbor a strong sense of feminism in you. Feminism is definitely not just about burning bras, as some may have misperceived, but rather about the belief that men and women are equal. This simple conviction may be just what our country needs in its long journey towards gender equality. Let us encourage the girls who believed they were only destined to be housewives to run for office, or be a journalist. Indonesia needs more strong women figures – whether that be in the business of movies, politics or literature – in order to provide role models for these girls. Pfeiffer even goes so far to say that being in a women’s college teaches her to be a better leader. “It may not be widely known, but women’s colleges have been known to instill a sense of leadership in their students,” Pfeiffer said. “Graduates of women’s colleges comprise of more than 20 percent of women in Congress and are 30 percent of a Businessweek list of rising women in corporate America.”

I think it is safe to say that an American women’s college is the perfect solution for ambitious Indonesian girls, as they aim to produce women leaders in society. With that being said, I would like to end this with a quote from Barack Obama’s commencement speech at Barnard in June 2012, “Never underestimate the power of your example. The very fact that you are graduating, let alone that more women now graduate from college than men, is only possible because earlier generations of women — your mothers, your grandmothers, your aunts — shattered the myth that you couldn’t or shouldn’t be where you are… Do not underestimate the power of your example. This diploma opens up new possibilities, so reach back, convince a young girl to earn one, too.”

If you’re interested in reading more about women’s colleges, take a look at these articles: