“Why do you pick Spain?” is the most frequent question I got when I told people that I was leaving for Spain to study. I was surprised to see that this was such news for them. Isn’t living in a country where no one speaks English the most fun? Well, at least that was what I had in mind when I selected the country to study in. I am very grateful for the LPDP scholarship program for allowing me to go to Spain and have the best experience in the land where only minority of the people speaks English.

My name is Paula Luciana and I just recently returned to Indonesia after one year completing a Master Degree in Universitat Autònoma de Barcelona, Spain. I hold a degree in Political Science and I will share some bits of my experience living in one of the top destination cities in Europe.

The first thing of my consideration is that I fell in love with the language. Until now I love listening to Spanish-speaking people having a conversation. It sounds so vibrant and exciting. For this reason, I wanted to live among people speaking Spanish. Getting lost somewhere while no one understands what you are trying to explain, is the most exhausting and yet, exhilarating feeling ever! That is what actually happened to me when I first arrived in Barcelona. I was looking for the university, which apparently is a bit far from the city center. I had to take a train to get there, but nobody at that time knew how to explain the route in English. Of course that is not always the case. People in Barcelona do speak English, but when I was at the train station, it just happened that none of the officers speaks the language. To make things worse, at that time I spoke Spanish like a dog who was trying to speak human language. Nada! After a while speaking in Spanish, they started using body language to explain which ticket to buy, which platform to wait for the train, and I finally survived arriving in the university. Learning how to memorize a completely foreign language and to finally be able to communicate it is the most fun thing ever. At the very least, now I can explain something in Spanish although I would need more time to learn Catalan, their own language. 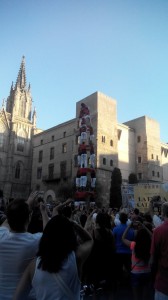 Other than that, Barcelona is a really nice city to live in. The city is a mixture of very old gorgeous neighborhoods and new infrastructures. They manage to maintain these two combinations, making it such a nice place to experience living in. Public transportation is very well established but ancient-looking churches and streets do still stand until now. Plus, the city is surrounded by beaches. It is just hard to be sad when every time I step out of the apartment I lived in, I was greeted by good weather (almost 3 months of summer!), good food, the Cathedral, Basilica del Mar, Barrio Gotico, people walking their dogs, and more.

A huge challenge of living there is when you need to deal with paperwork, both in the university and in registering yourself to obtain a residence permit. These two might get a bit tricky because they demand a lot of requirements and not many times I met officers who are able to speak English. Luckily, many of my classmates are from Latin America so I could ask for their help. Otherwise, there are many things I would miss. Officials dealing with paperwork are also not the nicest people in Barcelona. Hence, patience is a must! You need to be extra careful in following all of their administrative procedures and once it is done, your life will be much easier.

Nevertheless, in return, I was able to observe and join some of the political actions conducted by the citizens there. Since Barcelona becomes one of the states to demand an independence from Spain, there are many political demands coming from organizations and political party in the region. I also studied political science, which made me able to follow some discussions with the local, understanding their point of view on why they want independence. It was very interesting to see the dynamic and different angles of citizens in Catalunya and other Spanish citizens outside Barcelona. The autonomous government, that indicates its preference to be in the right spectrum, while student and trade unions are in the left spectrum, has created several unfinished matters, even until when I had to return to Indonesia. It amazes me how politically aware they are about their autonomous region and their country, and for this reason, serious struggle for basic rights are still prominent. Hopefully positive results can come out of this.

In the end I have a very good impression of the city, the people, and the university where I studied and I wish there would be another time in my life when I can go and visit Barcelona, again. Hasta luego, Barna!