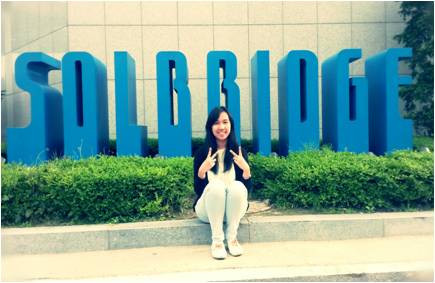 If you are fond of Korean-related things such as K-Dramas or K-Pop, you will definitely know this common stereotype: Koreans mostly can’t speak English. They even invented a word for themselves – Konglish, that stands for Korean English. This language barrier thing has been a nightmare for foreigners who can’t speak or understand Korean when they work or study in Korea.

Commonly, all Korean universities such as Seoul National University and others require their international students to pass TOPIK Test level 3 or higher as one of their admission requirements. After that, the admissions committee will decide whether or not each student should take an additional Korean test. If the student has not passed the TOPIK level 3, then they may be limited to certain courses in their university, which will be a disadvantage for the student.

But now, if you can’t speak Korean fluently yet but you really want to study in Korea, fear no more! Say hello to a new International Business School in Daejeon, SolBridge University! Solbridge International School of Business is the first international business school in Korea offering world class facilities to students from all over the world. In fact, their student enrollments as well as our professors are 30 percent from Korea and 70 percent foreign. All the courses offered at SolBridge are taught in English. However, while studying at SolBridge, students will be required to take one Asian language (Korean or Chinese) as a second/third language. This skill will provide a significant advantage in the world of 21st Century competition.

SolBridge also provides scholarships for outstanding students that make the educational opportunity an extremely high value. The scholarship amount is up to 100% tuition fee. Scholarships are granted based on English proficiency and academic performance from previous place of a study. At the moment SolBridge has cooperation agreements on joint degree and student exchange with more than 200 institutions from all over the world. Thus SolBridge has become a platform for Global business leaders by giving them opportunity to experience different countries too. SolBridge has two intakes – Fall and Spring. So, students can apply twice a year.

I was so grateful that I am one of the Global Korean Scholarship (GKS) recipients to SolBridge University last Spring semester. While my friends who went to other Korean Universities said that they had such a hard time communicating (because they can’t speak Korean), I didn’t feel that difficult because everyone in SolBridge speaks very fluent English. The staffs, the workers, the lecturers, and all the students are 70% foreigners so of course they speak English very well.

Because SolBridge is like a melting pot of cultures, they take advantage of this situation by creating a big cultural event each semester: The Culture Day. Once a year, SolBridge has the chance to celebrate the cultural diversity at the school which makes the school one. Their multi-cultural study body took time out from their studies, projects, papers, presentations—even CEO mentoring—to showcase their cultures to the student body, faculty and staff. For days students from Korea, Russia, China, Uzbekistan, Indonesia, Japan, Kazakhstan, Vietnam, Thailand, and Kyrgyzstan, prepared their dance and song routines—sometimes practicing late into the night.

On the day of the event, other students from Korea, China, Uzbekistan, Norway, Russia, Germany, Vietnam, and Kazakhstan took over the second floor cafeteria and cooked some of their country’s traditional dishes. Culture Day 2014 started with a food festival on the second floor and proceeded to the fourth floor auditorium with special performances by students, which also included a special demonstration by SolBridge’s Taekwondo Club and a parade of nationalities. Even their honored President, Dr. John Endicott donned traditional Scottish garb—a kilt—to celebrate his Scottish roots.

Without question, SolBridge’s Culture Day is one of the highlights of the semester and one that students, faculty, and staff all look forward to each year. As students get ready for finals in a few weeks and finish all their papers and projects, memories of Culture Day will serve to remind them what makes studying at SolBridge a very special and unique experience.

One of the most amazing things from studying in an International University is how diverse the lecturers are. Almost all of them are lecturers from America, Germany, Kenya, and many other countries in the world. Even all the Korean lecturers are Korean-American! Their credentials emanate from some of the world’s best institutions including Harvard, Yale, Temple, Brown, Cornell, University of Tokyo, University of Michigan and University of Calcutta to name a few. Their experience spans not only first world markets like the U.S., Japan, UK, and Canada, but also emerging economies like India, China, Thailand and Malaysia. Imagine how amazing that is!

The three main objectives of the competition were: to educate the Asian Thought Leaders in the world; to enhance collaborations among universities in the world and to create a global network. During the three-day competition a real world problem from a Korean company was given to the students. The real life problem (in Fall semester 2014 ), which was outlined by Dr. Won Tae Jo from LG Company, was for students to come up with a business plan and marketing scheme for two types of fast charging stations for LG Chem’s Li-ion batteries for electrical vehicles. The idea was that it would be the kind of presentation which would be given to investors at a Silicon Valley meeting. On the third day of the competition, students presented their solutions through analysis and team work which were judged by three SolBridge professors before a standing room only audience.

One of SolBridge’s recent achievement is achieving the AACSB. AACSB (The Association to Advance Collegiate Schools of Business) was founded in 1916 and is the premier business school accrediting organization in the world. Of the approximately 16,000 business schools internationally, less than five percent have been AACSB accredited. SolBridge becomes the first private university outside Seoul and the Gyeonggi area to gain this recognition and the 14th university in Korea to be internationally recognized.

SolBridge thus joins a very elite group of the finest business schools in the world and pledges to continue to meet, even exceed, the high standards set by AACSB in the future!

So if you are interested, you can find more information about SolBridge International School of Business here :