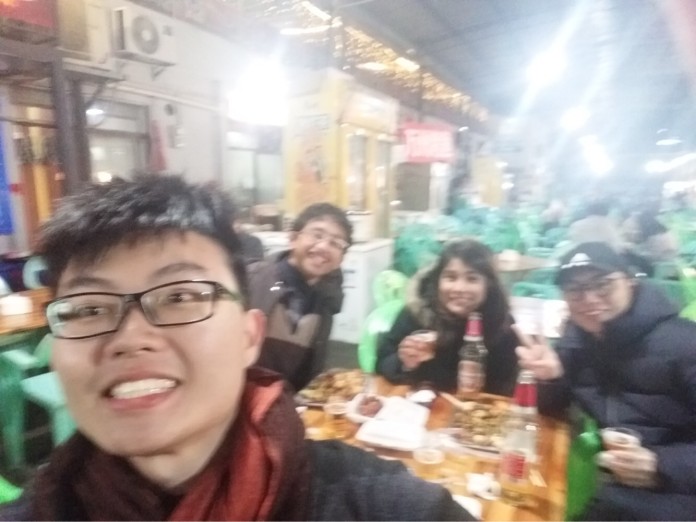 Decided to go to China for a short-term exchange program, initially Samuel expected nothing but academic credits for his college. Turns out, he experienced something more than that – and it was all because the language barrier he had to face.

In Nanyang Technological University (NTU), there is a requirement of short-term exchange program which lasted for two weeks. Three academic units can be rewarded once we have successfully participated in the program. At first, I planned to have the short-term exchange program in Vietnam, because I think this is just for the sake of academic units – and also because it is cheap. However, my parents told me to go somewhere that could give more insight to me. After some discussion with them, we decided that I will go to Chongqing University in China for the short-term exchange program. The program lasted for 15 days, started on 17 August 2017 and ended on 31 August 2017. What I expect from this program was simply to get the academic units for college requirement. I did not hope to meet new friends nor to experience the culture of China. However, little did I know that these 15 days would be very impactful to the way I think of myself and my surroundings.

Let’s start with the basic – I went to China, but I couldn’t speak Chinese at all. The day I went to Changi Airport to depart to China, I laughed when Chinese announcement was spoken while I was waiting in the boarding room. All passengers around me were communicating in Chinese. I realized how language barrier has put me in such disadvantageous position. I said many times to myself, how foolish I was to go to China alone all by myself. I started to imagine myself in China: being alone in the room with no one to hang out with, eating the same meal every day because that will be the only meal I know.

My first day in China, I was the last one to gather at the meeting point. If it wasn’t for Roniel ( I never met him before and we are just Whatsapp friends), I would probably stay at the airport for 15 days. I started talking to him because he was the first guy that introduced me to the group. We talked until we get on the bus that took us to the university. I was thinking that everything was going to be alright until the dormitory administrator started to talk in Chinese for twenty minutes. I realized how stupid I was choosing this program. The language barrier turns out not only about incapable of understanding the language but also about how my time was wasted listening to something I didn’t have a clue at all. What made this worse was that I should have known in the first place that this will happen. Keep in mind that I was with a group of twenty other student participants who understand Chinese language, except for Roniel.

Fortunately, in this program, I have a roommate named Jun Yean. He is in his final year and is very kind to help me translating Chinese words written in front of cafeteria boards when we were going to eat. I also met other wonderful people during my stay in China. There was a day where I was going to have dinner with some “friends”. The place was basically filled with “pedagang kaki lima” loudly offered us to buy their foods. One of the girls in the group named Tay Min asked me to go together so she could help me order foods. Turns out, this happened not only once but every breakfast, lunch, and dinner for fifteen days. At some point, I feel like a little brother and my “friends” as the older ones. This is because of the fact that they are much older than me and I feel so depending on them.

For the first couple of days, I genuinely thought about their kindness in helping me but our relationship was nothing more but they as a helper and me as the ones who seek help. My view on this changed when it was 25th December. I have no one to celebrate Christmas with and other students are not Christians so they do not celebrate Christmas. This is my first time of celebration with no family members to celebrate Christmas with. Two of my “friends” named Natassja and Clarence told me that for Christmas dinner, they will bring some food over to my room. The reason they are doing this is because on Christmas evening, I will stay in my room calling my family and Jun Yean was trying to save some money so we were alone during Christmas. Natassja said that although she did not celebrate Christmas, it is a time for people to gather. At first, I was skeptical, but around eight in the evening, they came to our room and really brought some food. I played some Christmas songs and we had dinner together. It was a very heartwarming moment for me.

To this day, I am still surprised how I managed to finish the program despite incapable to speak in Chinese. What surprised me more was how different the reality that I experienced in China from what I initially thought. Turns out, life in China is not only about short-term exchange for academic credits. In my spare time, I had a chance to travel to a sightseeing place which was thought to be thirty minutes walk but turns out took around ninety minutes – because we need to climb a steep hill and because I and Roniel got lost. Nevertheless, we really enjoyed the trip, where we would just walk along the road and laugh together while talking about what the future might hold for us.

I learned something during this short-term exchange program. One might say, friendship must be built upon same interest and background – otherwise, it will be impossible to make one let alone forming a social circle. However, I would like to propose something different. Most of my “friends” I mentioned here are all Chinese-Singaporeans. I have a different background to them and my interests are definitely not the same as them. However, I somehow able to form a good relationship with them. The reason for the good relationship is the disadvantage of my language barrier that makes them showed their kindness in helping me. Started with a help they offered, it then developed into a talk and friendship. I found that they are also curious about Indonesia so it was a good topic to keep the conversation going. However, if it wasn’t for the language barrier, I would not have experienced the kindness from them and I would probably be less social with my surroundings.

One of my Chinese lecturers taught us a brief introduction to Chinese philosophy. One of the principles is said to be “Disadvantage is a blessing”. At first, it was difficult to imagine. How can a blind person win a poetry reading contest if he is unable to read in the first place? How can I communicate with Chinese citizens if I cannot speak Chinese in the first place? As time goes by, I realized what it meant. Although disadvantages that we had will limit our potential to do something, it is still a blessing in disguise. The blind man can stop objectifying people based on looks and focus on their personality instead. I may not be able to communicate with the Chinese people nor experiencing the culture. However, because of this situation, I am able to experience the kindness I never had during my studies in NTU. Because of this situation, I am able to get closer to my friends and celebrate Christmas with some people I just met. Because of this situation, I realized how blessed I am right now because I obtained something unexpected. That something is a friendship.

Photo provided by the author