How did you get into 2D animation?

My interest in animation started a while back. Growing up in Bali in the late 80’s and early 90’s, I used to watch a lot of cartoons on TV and on VHS (remember VHS?). From Japanese animated series (e.g. Doraemon and Saint Seiya) to Disney’s classic traditional feature animation (e.g. Pinocchio, Aladdin and The Lion King). I fell in love with their beautiful drawings and storytelling. I knew then that I want to be working in animation when I grew up.

Why did you chose to study in Canada, instead of Indonesia, or other countries?

After I graduated from high school in 2002, I couldn’t find any animation schools in Indonesia. After researching for quite some time, I decided to study in Canada because Canada has some of the best animation schools in North America. In the end I picked Algonquin College in Ottawa, Ontario.

On a related note, why Algonquin College?

Algonquin College’s animation program has a very good reputation. Their curriculum was made in a way that helps students learn and develop skills which will be used at work. By the end of the 3rd year, students are given a chance to showcase their portfolios and demo reels to animation studios across the country who came to visit with a purpose to hire.

What was your experience at Algonquin College like, as an animation student?

In the fall of 2003, I applied for the 3 year Animation program at Algonquin College but unfortunately my portfolio failed to meet the requirements. They advised me to take the 1 year of Pre-Animation to help with my portfolio. I did learn so much in that 1 year and at the end I was able to create a portfolio that got me in to the 3 year program.

My first year went really well thanks to what I learned when I was in Pre-Animation. I had an idea of what kind of assignments and challenges I was going to be facing and how to tackle them. It was when I learned how to animate traditionally for the first time (drawing on papers and flipping them to see the animation), I thought to myself, this is exactly where I should be. I realised that I was heading towards my childhood dream goal!

In my second year I learned how to animate using a 2D digital software. There was a lot of trial and error but progressing steadily at the same time. Because I also worked part time on weekends, I did not have a lot of free time so I learned to manage my time better and to be discipline.

In the summer of 2006, a local animation studio called Mercury Filmworks contacted the college to see if there are any students who are good enough to work for them. At the time, I still had one more year of studying to go. Fast forward, I spent my entire third year working full time with Mercury, I went to classes only twice a week and graduated by the Summer of 2007 with one year of work experience under my belt!

Can you tell us a bit about your career so far? What kind of roles have you had, and what are you working on now?

After I graduated from college, I stayed with the same company for the next few years. I started in the animation department as a character animator. My main job was to pose out characters based on the storyboard and animate them.

In 2009 I moved into freelancing, I worked from home as a layout artist. For the first two years, as a freelancer I was drawing layouts on paper using pencils, then I would go to the studio to submit work. They will scan each drawing so they can be painted digitally using Photoshop. In 2011 animation studios were transitioning the way they do layout from traditional way to digital. I needed to own a drawing tablet or a cintiq to be able to work directly on Photoshop. Currently all layouts are done digitally.

At some point I took a part time job at Algonquin College, teaching layout design for the fall semester for the Pre-Animation program. I continued teaching part time for the next 3 years. I did all of this while I was freelancing full time.

I landed my first supervising job in mid 2014, working at the Kratts Studio supervising layout on the fourth season of The Wild Kratts. For the first time since my animation days I was back working on a desk at a studio environment. A year later I moved to Jam Filled, which is the company where I am currently working at.

Right now I am supervising layout for a Warner Bros series called DC Super Hero Girls, which was premiered recently on March 8th. on Cartoon Network. Check out the trailer here!

What is day-to-day life as a layout supervisor like?

When we received assets from an episode sent by our clients, one of the first few departments to deal with them is the layout department. As a layout supervisor, I analyse the storyboard from new episodes each week, and then I use the analysis to delegate work for layout artists. Each artists would come in to the studio to meet with me one on one to discuss their scenes, and I would help by answering questions and sometimes I give out revisions. Once I approved their final scenes, I would send them to the BG colour department to be painted. Then the whole process repeats.

In that same week, I go to a couple of scheduled meetings. We have our internal meeting to track the status of different departments and to discuss concerns or suggestions regarding a certain episode. We also have a video conference meeting with our clients who are mostly from the States.

Among all the projects you’ve worked on in your career, what has been your favourite to work on and why?

This is a tough question to answer! In 13 years of my career I have worked for studios who do projects for big name clients like Warner Bros, Disney and Nickelodeon to name a few. I enjoyed working on each show but I can list my top three and why I picked them:

To see other projects I have worked on, you may check my LinkedIn page. 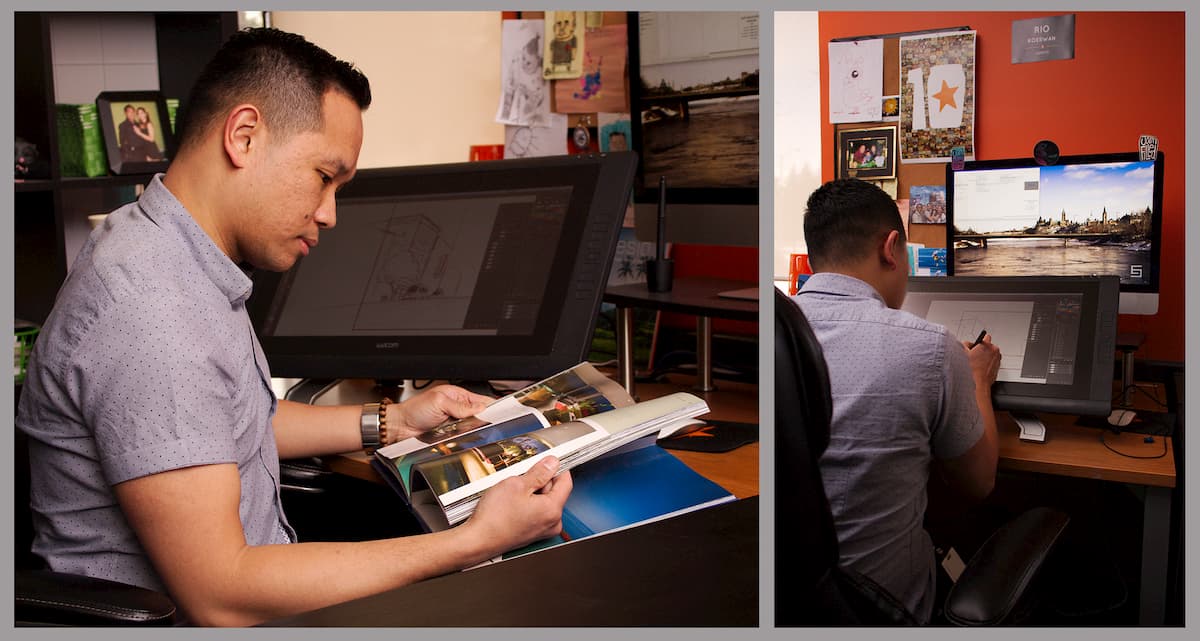 How have you enjoyed living in Canada so far? What is it like to live in Ontario? Do you miss Bali? 🙂

Canada is a big melting pot. Everyone here came from some other country at some point and because of it, you get to experience different cultures and languages. One thing I noticed since I first arrived in Canada and to this day, Canadians are friendly and very polite!

Living in Ottawa has been great, it is mostly similar to living in Bali where the people are more laid back unlike Toronto which I often compare to Jakarta. But Ottawa weather is a different story. It is the seventh coldest capital in the world. The average temperature during winter here is -15C and on a very cold day it can go down to -40C!

I do miss Bali because my parents and sister live there. I definitely miss the warm weather and the food as well. Summer only lasts about 2 to 3 months here between June to August, so I take advantage every year by going out in the sun as much as I can. But Ottawa is home to me and my family now. I don’t get homesick as much anymore because I have adapted well and I have many good friends who are like my own family to me.

Can you talk a bit about your immigration status in Canada?

I was working on a work permit for a few years after I graduated from college. In 2010 I applied to become a permanent resident and it took about a year to obtain it. At the time, they were using point base system to check if you are eligible. For instance, I came in 2003 to study for 4 years, graduated and have worked for 4 years before I started applying. I got points for hitting each of those milestones. I also had to pass an IELTS test and had to do a medical checkup. Then there were a long list of other documents I had to collect to submit with the application. Where you live in Canada, which province, which city and what you do for a living, can all play a major factor in obtaining the PR card.

Just in case the rules and requirements have changed since I applied 9 years ago, for those who are looking to apply, it is better to go to the Canadian immigration website to get more information.

Born and raised in Bali, Rio moved to Canada at the age of 18. He is currently a 2D digital animation layout supervisor based in Ottawa. He graduated with an Advanced Diploma in Animation from Algonquin College in 2007. He has been working at major animation studios in Ottawa on various projects from shorts, television series to feature animation productions. He is passionate about art such as painting, drawing, music & film. In his spare time, you can find Rio playing soccer, basketball, strumming his guitar, singing for fun and spending time with his family.

All photos were provided by Rio Koeswan.