We have mountains, volcanoes, lakes, rice terraces, and wide incredible seas where you can swim and say “Hi” to the beautiful coral reefs and fishes

Most of our fishes do not “bite” you, but hey, we also have manta rays and whale sharks

If the fishes do not bite you, our people won’t, either

They might not be very good English speakers like you, but they will welcome you with a big warm smile

They will ensure that you feel comfortable, even though what they can provide is just a tiny room with a simple bed

They will let you to taste delicious Indonesian dishes, and they might tease you if you cannot stand a spicy “sambal”

They may eat with spoon, or spoon and fork, or hands (not chopstick unless they eat sushi or sometimes noodle)

When you say goodbye to them after living at their place only for few weeks, they might cry and would feel like they’re losing you 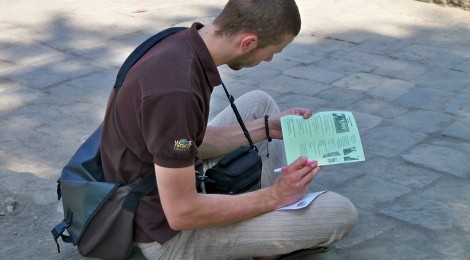 So you will see that “diversity” is our greatest asset

We have more than 300 ethnic groups in Indonesia which automatically contributes to the hundreds of local languages in Indonesia, but we have Indonesian as our national language

We write with ordinary Latin alphabet, not with special characters like in China, Thailand, Arab, Japan, or Korea

Btw, my Grandfather speaks fluent Dutch, even until he passed away in the age of 90

Because Indonesia was colonized by The Dutch for around 350 years

But it doesn’t mean that all Indonesians speak Dutch, because I can only understand a little, and many others might not understand at all

Some of our food, culture, and language are influenced by Dutch, and you will also find some old Dutch colonial buildings, including my junior high school

There you might find “a little” area where the local people eat dogs, but it doesn’t mean that “Indonesians eat dogs”

There you will know that Indonesia’s population is dominated by Muslims, but it doesn’t make Indonesia an Islamic country

We also have other religions: Protestantism, Catholicism,Hinduism, Buddhism and Confucianism

You will find a special city in the west of Indonesia that has a “Sharia” law, but you must also have heard about Bali, that is dominated by Hindu

And yes, Bali Island is ours, but I hope you will also visit the other beautiful destinations

You will also see some majestic Buddhist temples, Hindu temples, and Chinese temples

I hope one day you will visit Indonesia, from the west to the east

So you won’t generalize that all Indonesians are the same, even we might be very different just by the look

Some might have light skin, most have tan skin, and some others have dark skin

Some eat spicy food, some eat sweet food, but most of us eat rice

I hope one day you will visit my hometown, Yogyakarta

Where we have a King, a real King that governs the city; the only region in Indonesia that is still governed by a pre-colonial monarchy

But I hope from what you see in my hometown you won’t generalize that the other parts of Indonesia are similar to that, because the differences can be 180 degree

If Indonesia is too far for you, I hope one day you will visit Asia, where in general people are warm and friendly

But again, remember, if you visit few countries in Asia, it doesn’t mean that all Asians have the same food, language, culture, and behaviors

Would you want to agree that the Brits and Spanish are “the same”?

I hope one day you will visit Asian restaurant

Where you will eat rice or noodle

If the food served there represents the “whole” Asia

If what you hear is a “no”, then I hope you stop thinking that the whole Asians and Asian countries are all the same

This poem is written because we, as Indonesians who we live abroad, especially in the western world, always receive certain stereotypes about us, and some of them are false ones. The author also experienced the same thing during her stay in Denmark and when she travels to other European countries. Local people thought that Indonesian language has a special character or sounds a bit like Chinese, Indonesians eat with chopstick, all Indonesians are Muslims, etc. This might occur because Indonesia might not be very popular to them, so they just make a “categorisation” based on other Asian countries they know, or the largest Asian country that should be the valid representation to the whole Asia. Even though stereotyping is unhindered, the author believes that we as Indonesians have the right to inform people and the right to defend, especially if these categorisations could harm us. If you have opinion or similar experiences to share, please write in the comment below. Also feel free to share this poem if you think this could overcome false stereotypes of Indonesia.