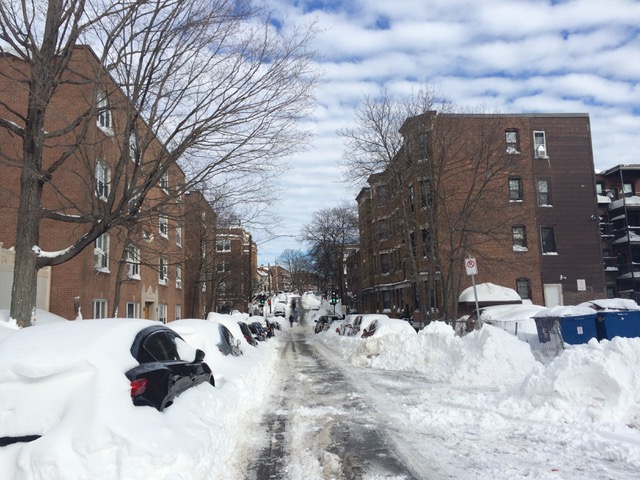 Studying abroad to a new country is always an exciting beginning of a whole lot of uncertainties. Despite all the preparations that we can do at home, there are always new things that we need to adapt quickly in the university as well as the neighboring area; the language, the culture, the food, the people, the climate and the list goes on. Due to the fact that global warming has often changes the direction of the climate, it is not rare for international students to face extreme weather conditions that the locals have not even faced it before. I personally had to deal with such condition when I was studying abroad for my graduate degree.

When I came to Boston back in January 2015 for the first time, I thought I was fully prepared. I already bought some warm clothes and winter coat in Indonesia to survive the first days. Some people I know, who had visited Boston in winter, have warned me that it would be really really cold. I had experiences living abroad during winter season, so I was like “what could be worse?” Apparently, the blizzard that hit New England was the one who welcomed me during my arrival. A six-weeks-plus snow siege in January and February 2015 had parts of New England breaking all-time records, which includes Boston with around 110 inches or around 2.8 meters of snow (when the average was around 43 inches). It may sound terrifying but actually it was not that bad if you are well prepared. I would like to share my experience on how I survived during blizzard as a student. 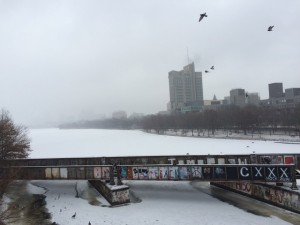 Keep yourself warm outside

When I realized my winter coat was not made for Boston winter (especially during blizzard), I invested on buying new winter attire. During the blizzard, I had to wear 2-3 layers when I went outside. I wore thermal wear and long johns, with some cardigan or sweaters as second layer, then finally the winter coat as the outer. It was a hassle to take the outers off when I was inside the building. It might be sweaty as it can be when you are in the classroom with hot central heating while wearing your thermal wear. Winter boots are also important and I suggest you to use the ones that make you comfortable (and warm enough) walking outside during the cold season.

There were times when I tend to hole myself up in the winter, which means staying in the library without exercising outside or at the gym. To stay healthy during the winter, you should try twice as hard to stay active. Make a schedule to go the university gym during a week, for example. Give your brain a break as you give a reward to your body. In Boston, it is so common to see people running and jogging during the winter (even with their summer outfit – only t-shirt and shorts!). One thing you might do to start the healthy habit is by dress properly and go outside. If you are not really into running, cycling in the winter isn’t as hard as it looks. Or else, there are always indoor sports that you can try. In addition, it might be a good time to try some winter sports, e.g. skiing and snowboarding.

Be comfortable in your own room

Make sure to keep the heat inside your bedroom. I decided to buy additional portable heater because the central heating in my room was not warm enough. Humidifier was also particularly effective to prevent dryness that can affect many parts of our body. Do not forget to routinely open your window for letting some fresh air in. Last but not least, do not forget to heat yourself. Wear whatever you are comfortable with in your own room. Warm blanket and socks were my favorite things to keep me warm when I was home. 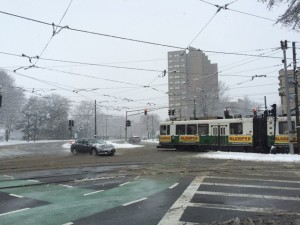 Starting your school in winter, which is not exactly the happiest of seasons, may need certain attentions. When you suffer from seasonal-affect-disorder, try to focus on positive things and try to soak up much natural sunlight as much as you can. It was a quite a challenge to adapt in cold weather with limited sunlight when you have been blessed with abundant sunlight back in Indonesia. One way to beat the winter blues is by embracing the season itself. You might keep the exercise or yoga routinely or focus on the winter’s gifts: wearing heavy stylish winter coat, making soup for food or looking forward for the snow.

During the blizzard, there were several classes that were suspended, due to storm. It would be great to prepare enough food at home, in case of emergency. You should be ready with anything that can happen, such as losing power at home or broken public transport (which happened in my case, and I had to either walk or use an Uber). During “holidays” due to storm, try to be productive by reading or keeping up with the class materials to keep you always on fire during the semester. 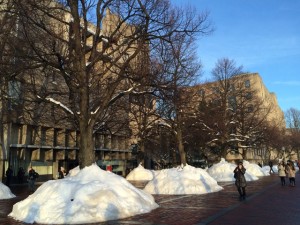 I feel grateful enough to experience the cold winter during my master study. As I put my best effort to beat the winter blues (while being overwhelmed by problem sets), I chose to view winter and the blizzard in a more spiritual way. It was some kind of reflection time, to be grateful for what we have and a moment of renewal. Winter is definitely coming, but keep in mind that spring is waiting to rise. I hope the experience of winter will bring you joy and happiness while studying abroad.

All photos are provided by author.