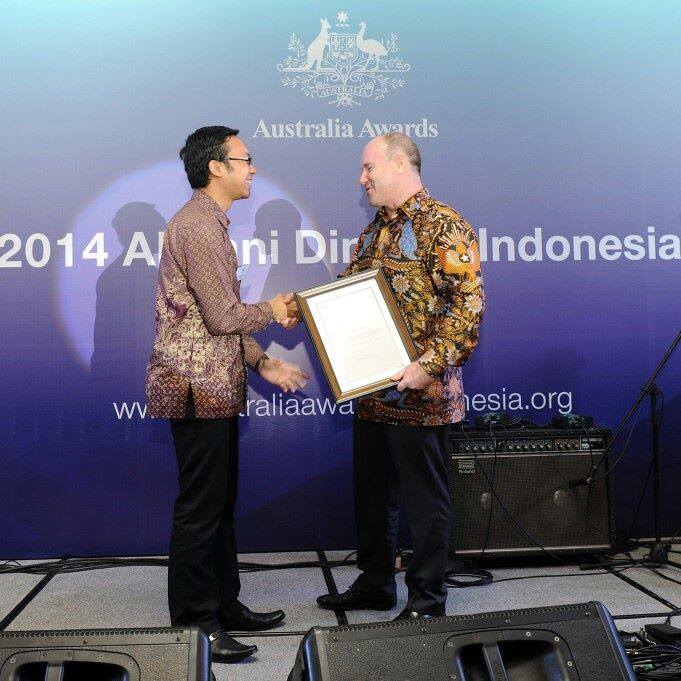 In this article, our columnist Made Ayu Sayaka had the opportunity to interview a well-known and all-rounded individual within the PPI realm; Pandu Utama Manggala. Pandu here tells the story of how he became to the person he is now, and how he manages to juggle his various activities.

When I asked Pandu Utama Manggala to introduce himself briefly to start off our interview, he answers concisely, telling the story smoothly with no hiccups, in chronological order; it is clear that he has done it many times before.

In a young age, he has achieved many things– one would not know where to start. He is now at the end of his PhD studies in Japan. Japan is not his first rodeo; he has studied abroad in Australia before at ANU. Prior to that, he did his undergraduate studies in Universitas Indonesia. It is rare for someone to partake the same major for all three levels of studies, yet Pandu has done it. He consistently studied International Relations throughout all three level his studies, from undergraduate to PhD.

His friends call him an Intellectual-Activist: an academic who is also involved in community, organizations. Let’s start with his undergrad. He was very involved in the student body. He was the President of BEM FISIP UI, and he managed to earn the highest GPA award. At the UI graduation, he was awarded Bintang FISIP UI– an award for who did stellar within and outside their studies. It was not only in Indonesia. After starting his masters in Australia, he quickly started his involvement in PPI (the Indonesian Students’ Association) Australia and became president of the organization– all while doing double masters in IR and diplomacy. He ended his term with a Best Thesis Award, and the Excellence Award from the Australian ambassador. Japan is no different. A mere week after he arrived, he became the President of PPI Kanto, and led PPI Jepang the year after, and, as if it was not enough, became the coordinator of OISAA (Overseas Indonesian Students’ Association Alliance), representing all Indonesian students abroad. His friends often joke that he will earn two PhDs: one in IR, and another one in PPI. 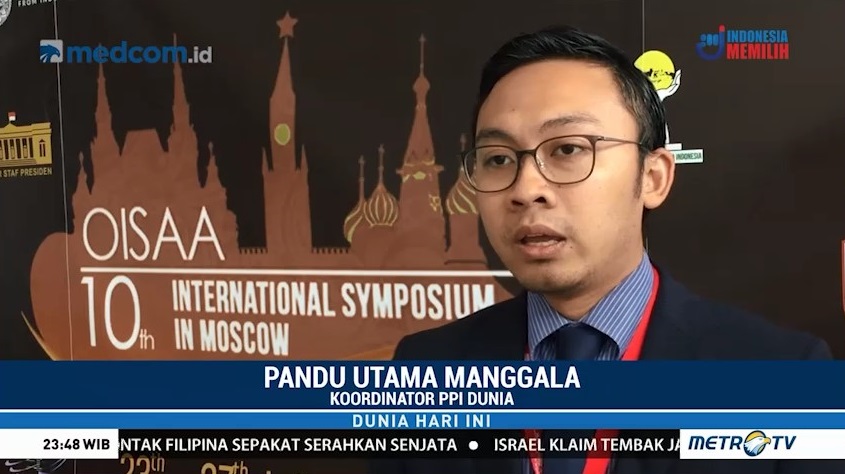 How does he manage to achieve all these?

We know that the law of economy does not allow that. There is always a trade-off, a time constraint. A person who studies hard will not have time outside his studies; a person who is involved will let his studies suffer. Yet Pandu seems to have always defied this law. His key? Passion. “Love your work, and you will excel in anything you do.” He started off the interview mentioning IR and is sure that his passion lies there. He reads newspapers, books, articles on IR- related global issues.  He is also passionate about community involvement. He wants to benefit other people. His logic is simple: be passionate about what you do, and you’ll find a way to do it. “We all have 24 hours,” he says, “it’s just a matter of how you manage your time” He reads the news in the morning to keep him updated on International Affairs, in the afternoon he handles his organizational works. he studies, writing papers in the evening. He also has a strict target for himself: read the news every day and finish reading three books a week.

“I want to prove that you can excel in your studies and be an activist too,”– and he did.

I wanted to trace back to where this all began, so I asked him where the turning point in his life was. He thought about it for a full second and answered that it was during his time in his high school, SMA Negeri 1 Bogor. He spoke fondly of his memories in high school. Before he entered SMA Negeri 1 Bogor, he claimed that he was shy and introverted. But in high school, he joined Pecinta Alam (Nature lovers) club and OSIS (the student body) and both organizations really taught him a lot, he says. “I think it was the values I learned from Pecinta Alam and OSIS which really made me who I am”. He credits his seniors who taught him words he lives by today, such as “you only get what you give”, “keep fight and you will win”. To join the Pecinta Alam club, the candidates had to do a five day-camp in the forest, and he had to memorize poems. One poem hit him, “Kerendahan Hati” or humbleness of the heart, by the famous poet Taufik Ismail. He recites the poem to me, word by word. It is clear that he has it memorized by heart.

He learned to best the best of yourself in every position.

The same story goes for his academic passion. In high school, Pandu was in the Science program (IPA). He never got the top ranks in his class. He read a book about the World War by P.K. Ojong, and got interested in studying International Relations. He studied to get into the prestigious International Relations program in University of Indonesia. He had to attend extra lessons and catch up with the social science programs. I teased him of being smart- he deflated quickly again, saying it was not about being smart but it was the “passion”.

His involvement during study abroad was focused in his contribution to Persatuan Pelajar Indonesia, or the Indonesian Students’ Association. He wanted to give the best of himself to PPI, and liked to decide and manage programs that would benefit others. He saw that PPI Jepang was quite idle, so he created a program to welcome freshmen to make the new Indonesian students feel at home. His contribution in PPI Dunia has a much bigger scope. His most successful program was “Bantu Guru Melihat Dunia” (“Help Teachers See the World”), which he and his team designed to send excellent teachers, whom went through rigorous application process, send them to visit schools abroad to learn about education system in other countries. Pandu admitted that although his friends label him as an ambitious person, he does not see it that way. “Actually,” he says “all those positions [being the president in PPI] came to me,” referring to the time that he arrived in Japan and getting asked to run as there was no candidates at that time.

He believes that PPI should contribute back to Indonesia by making programs that would benefit the country. “When Bung Hatta went to study abroad in the Netherlands, they [and Bung Syahrir] voiced their dream of an Indonesian independence by writing articles there”.  “He [Bung Hatta] was 26 years old at that time,” he says, “and no one would have thought that 20 years later, the dream [of Indonesian independence] is realized. That’s why I always say “Mimpi tidak ada yang terlalu tinggi; yang ada usaha yang terlalu kecil (no dream is too high, only effort that is not enough”
He then continues on, citing that Indonesians who study abroad should give back to their country. “You have to join PPI for Indonesia,” he says, but he also places importance in being friends not only with Indonesians but also with other international/local students, because “You are the ambassador of the Indonesians.”

In his free time, he plays futsal, watches movies (he favorite is Marvel movies), and he also loves to collect jerseys. His favourite team is Juventus, and he has more than a hundred jerseys. “I have a special wardrobe to keep my jerseys. My dream is to open a museum of my jersey collections someday,” he answered with a chuckle. His childhood hero is Alessandro Del Piero. “My time in Sydney coincided with him moving to Sydney FC. I [used to] always go to Sydney to ask for his autograph”. 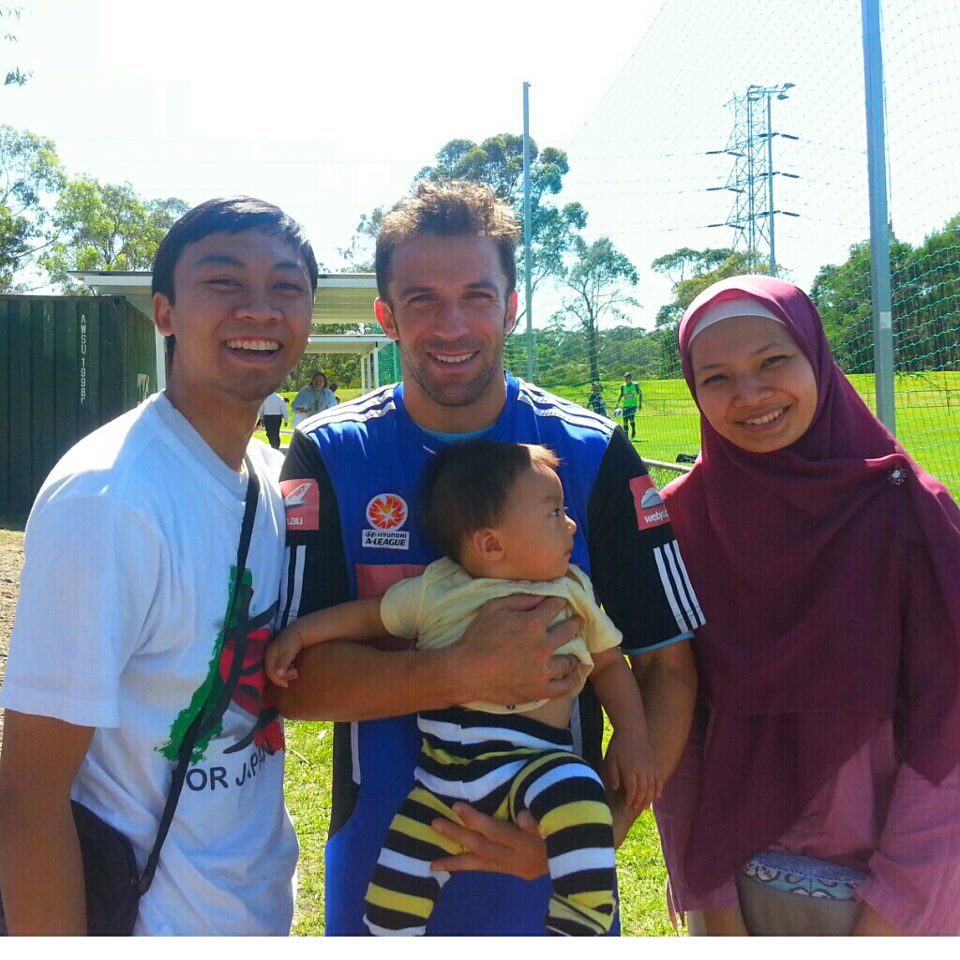 Pandu, with his family, meeting Alessandro Del Piero in Sydney

So, what is his advice to Indonesian students?

“First, find your passion,” he says, and when I asked him about whether Indonesian students should continue their education abroad after high school, he highlights the benefit of studying in Indonesia and abroad. “In undergrad [Universitas Indonesia], I built my character.. and I learned about the problems in Indonesia…and when I was abroad I could see [things] from different perspectives.” However, he also thinks that if one does undergraduate studies abroad straight after high school one “might lost sensitiveness about problems in Indonesia.” “But I don’t judge,” he quickly adds, ” it depends on the person. Just find your passion; that’s the most important question.”