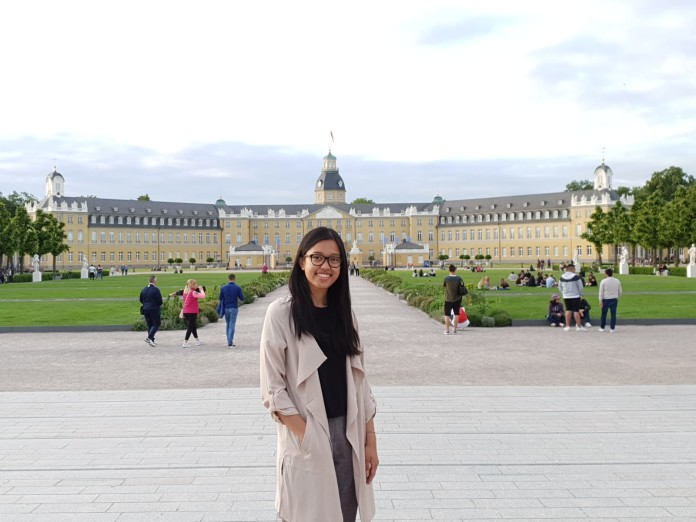 An internship is the best way for university students to learn about the professional world and further their career interests. With an internship, not only we would learn technical skills from the job, but we would also learn from the people we work with and about the culture of the company. In this article, Indonesia Mengglobal Columnist, Dini Putri Saraswati, interviewed Alisa Ismi Rahmawati, who interned for Nestlé Deutschland AG in Hamburg, Germany, during her study to become a food scientist.

I have known Alisa Ismi Rahmawati for more than 10 years as she was one of my classmates since elementary school. She was always interested in natural science and foreign languages. Thus, one of her dreams was studying natural science abroad. She finally managed to pursue her Bachelor’s degree at Karlsruhe Institute of Technology (KIT) in Karlsruhe, Germany to study Chemical and Process Engineering after completed her study from SMA Negeri 15 Surabaya. She has gained a lot of experiences from her study in Germany and one of them is being an intern at Nestlé Deutschland AG in Hamburg, Germany. In this article, Ismi shares with us her experience of being an intern at Nestlé in Hamburg as well as her adventurous journey studying in Germany.

Hi Ismi! Can you please tell us a bit about yourself?

Hi! My name is Alisa Ismi Rahmawati and you can call me Ismi. I am 27 years old and I have been living in Germany since 2011. Right now, I am working in Mindelheim, Germany at a dietary supplement company. In 2018, I got my Bachelor’s degree from KIT majoring in Chemical and Process Engineering and my specialisation is in Food Technology.

During my study, I joined Perhimpunan Pelajar Indonesia (PPI) Karlsruhe as a Treasurer as well as volunteered for several annual events, such as Sportsfest, a sports competition among Indonesian students in Karlsruhe and Indonesischer Kulturabend, a cultural night event for Indonesian students to be presented in front of the international audiences. I also got a chance to present traditional dances on the events, such as Tari Betawi and Tari Piring. It was such a wonderful moment of my life here in Germany to introduce Indonesian culture to the international audiences.

What was the most challenging experience you had while studying in Germany?

Although I have passed my Studienkolleg in 2012, it was still very difficult when it comes to studying in a real class in Germany. I was expected to speak German fluently, while I was still in the process of learning. At first, I was stressed out as I felt unconfident with my German skill, especially around the natives.

Moreover, I had a culture shock when I started studying in Germany. At KIT, I had to sit in a very big class of dozens if not a hundred of students and the lecturers may not even recognise us at all! Therefore, I needed to keep up with the courses although it was quite tough for me to concentrate and the fact that everyone spoke German. Ultimately, I have passed those hard times after what seemed like a never-ending struggle.

Did you do an internship during your study?

Yes, I interned for six months at Nestlé Deutschland AG in Hamburg, Germany in 2018. I chose this multi-national company because of my growing interest in food technology. During my study, I took part in a team project to develop an extrusion food processing technology and we created small ready-to-eat snacks like puffs. The project was quite a success that I was convinced to find an internship in food industry.

How did you manage to get hired at Nestlé in Hamburg?

I applied through online job portals such as Indeed or Stepstone. On those websites, you will find a lot of jobs offered according to your matched criteria. In my case, Nestlé in Hamburg suited me best, so I clicked on the link and it redirected me to the official page of the company. After that, I uploaded the necessary documents to the company’s website, such as resume, identity card, and the latest diploma.

After a while, they invited me to come for the interview to their company. I was still in Karlsruhe at that time and it is very far to travel from Karlsruhe to Hamburg. Therefore, they covered my transportation cost. In Germany, it is normal for the companies to cover your travel expenses for your interview. So, worry not if you got an interview invitation even if you reside far away from the company.

I arrived in the company thirty minutes before the interview. Please mind that German people are very strict with the time. Thus, it is always better to come earlier.

I was interviewed by three stakeholders; a head manager, a supervisor, and a human resource recruiter. I was asked about my motivation of interning there as well as my study, such as the project that I have made and the course that I have taken. They also asked about my extracurricular activities, such as organisations and sports.

Within a week, they informed me that I was hired by their company. Then, I immediately prepared myself to move to Hamburg.

How did it feel like interning in one of the world’s most well-known multi-national companies?

It felt awesome. I worked with amazing people from whom I could absorb a lot of knowledge and experience. I also learned about the working experience in Germany and what  surprised me the most was that there is no hierarchy in German companies. I called my supervisor and head manager by ‘du’, an informal way to say ‘you’, rather than ‘Sie’, a formal way to say ‘You’ and they were totally fine with that. They were also very helpful and had a solid teamwork that I could always ask anything to them. They even considered me as the permanent employee there.

Moreover, the working life in Germany is very well-balanced. They work hard during the working hours but after office hours, they would not even think about their work and have a good quality time with their loved ones instead. In terms of working hours, I had eight hours of working at Nestlé in Hamburg with the annual leave of 26 to thirty days. If I were overworked, I would get a time deposit that I could exchange for an off day. That way, I learned that German people are extremely disciplined and respectful to labour rights. Do not forget that most internships in Germany are paid, so it is indeed very rewarding.

What did you do during your internship?

Every morning we had a meeting at the Research and Development Department to follow-up the work. My main intern project was mainly about improving the production process of schoko crossies using Define, Measure, Analyse, Improve, and Control (DMAIC) six sigma. It was also quite challenging that I developed new schoko crossies recipes for different seasons and it was highly appreciated by my supervisor and team. I also partook in the packaging department to improve the stretch wrapping system of the exported products. I also got introduced to other departments too, such as quality control, engineering, and production.

What would be your suggestions for those who are interested in finding an internship programme in Germany?

Make the best resume because you have to be able to ‘sell yourself’. Moreover, you also need to have extracurricular activities during your study. I mean, having good grades is important too, but most companies are more interested in those who are actively engaged in certain organisations. You can also visit the career service centre at your university to learn more about how to apply and enhance your potential. They would be very happy to help. Before the interview, do research about the company in advance to match the company with your expectations. Lastly, do not forget to pray to the God too.

Alisa Ismi Rahmawati or Ismi, moved to Germany in 2011 for studying. She graduated with a Bachelor’s degree in Chemical and Process Engineering with a specialisation in Food Technology from Karlsruhe Institute of Technology in Karlsruhe, Germany. She had a 6-month-internship in Research and Development Department at Nestlé Deutschland AG in Hamburg, Germany and currently works in Mindelheim, Germany as a dietary supplement developer. Her interest in dancing has given her the chance to present Indonesian culture through traditional dances such as Tari Betawi, Tari Merak, etc.