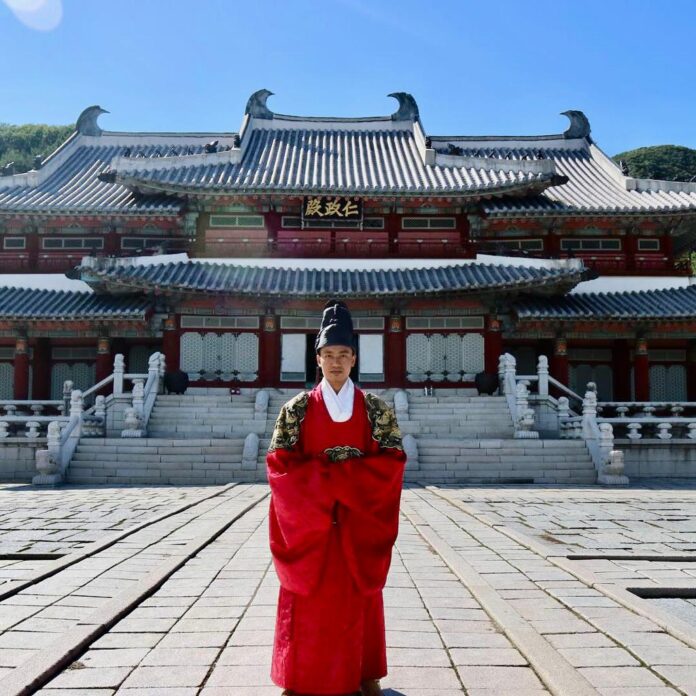 It just started with a simple dream, a simple talk, a simple step, and simple action. This is a story about two best friends building their dreams together to make an impact and give back to society. How their boundless dreams turn into boundless journeys and boundless impacts. Let’s read further and hope that you can be like them too! Making an impact on society.

One of the principles that Erahmat always holds on his journey. He prefers to work “behind the scenes” not to let people know about what he did. He just wants to make his impact come true and then let people know what’s going on in the background by itself.

I would like to introduce you to one of the co-founders of an Edutech startup, a guy named Erahmat who graduated from Institut Teknologi Bandung in 2016. He studied Bioengineering for his bachelor’s degree and pursued his PhD in South Korea. This is currently his 4th year in South Korea and he has already made a boundless impact together with his partner and team on society while studying abroad. This is a story about how a journey of a thousand miles begins with a single step.

Hi Erahmat! First I would like to ask, how does your journey actually start?

Through this, I traveled all around Indonesia to help schools prepare for the competition. The demand was high and I couldn’t handle it by myself. Thus, I tried to make a consultant service to make the business sustained and recruit teams of teachers.

Besides that, I also started to make another consultant in the field of CSR (corporate social responsibility) and obtained some community development projects from some big companies that allowed me to travel to several cities such as Papua. My focus area is still related to education and people development.

Those little steps were the starting point on how I developed myself and started on my business journey. I learned there and started to impact the community and from the passion of wanting to grow more, I led some organizations and joined leadership camps where I met my best friend who turned out to become my business partner.

Can you elaborate more on how you met your best friend?

So, I have a friend named Angga, friends from the same campus but with different majors. Angga studied visual communication design and I studied bioengineering. We met in an organization and even joined a leadership training (Rumah kepemimpinan) at Institut Teknologi Bandung for two years.

The leadership training was actually held nationally and we needed to stay in a dorm located at each university for two years. Every term, all of the members were gathered in a national leadership camp and there we can make friends and connections from all over Indonesia. I met many leaders from different universities at this camp. Fun fact, Bukalapak also started from the same stories. Two roommates (in Rumah Kepemimpinan) started their dream with a simple talk and made it into a realization. After we finished the program, with the fuel of leadership and everything, Angga wanted to become a leader of the Student Council in ITB. He asked me to help him during his candidacy, however, I rejected his offer because I was still busy leading my organization at that time.

Long story short, we graduated and went on our own path. I continued my business in Indonesia for two years and pursued my further studies in South Korea, while Angga worked on a different startup and pursued his further studies in the United Kingdom. Each of us gained our own skills and knowledge from the experience that we have been through. After all those years of wanting to work together in a student council and getting rejected, Angga was not giving up. He still has the drive of wanting to work together with me.

Interesting story, how do you have an idea of making a startup in Indonesia and moreover while studying abroad?

It was still all started with Angga’s passion for building a business with me. He worked in some of the startups in Indonesia and from his past experience, he also wants to make a startup. But the situation now is different, we have already matured and gained a lot of experiences.

I have experiences from my small businesses and Angga has those experiences from working in different startups. I eventually agree but with a mindset that if we start with something it needs to make something. We can’t work on it half-heartedly. Thus, we made Linimuda in 2020 to early 2021, a platform of Information and Inspiration Media for Young People. However, this kind of platform is like a leech. Leech needs blood in order to survive, while the media needs a big capital to sustain itself. Hence, a lot of media platforms were owned by conglomerates.

Time flew but the business was not working well, so we made Linimuda into a writing community. There were many writers and articles in Linimuda. In Linimuda, we also made a weekly online seminar and some big national festivals where we invited inspiring people. As I said before, I want a sustainable business, therefore in 2021 May, we made a company named PT Linimuda Inspirasi negeri.

From Linimuda, we have a lot of chapters (branches) in each city and we started to talk with some investors and startup founders in Indonesia. We were thinking of pivoting into an Edutech company since we have a big community now. After talking with some investors, they were not interested since the brand is not that attractive. Thus, we tried to change to MySkill.

For a startup, we need to make an MVP (minimal viable product) to be introduced to the market and when we start working on MySkill we were only using Google Form. So from Google Form for about two months, we tried making a website. We tried to find some freelancers to develop a website for e-learning and the website that you are looking at online is still the prototype website that we started last year.

Also, when we started this, we had a founding team that worked on the basis of believing in Angga’s and my dream. MySkill started without capital or funding, the mentors were basically from our network. That is why networking is important. The mentors were willing to help us just because of those networking and connections.

In August, our website was launched and in 2.5 months, we got about 300,000 users registered on our website. Two months after that, it doubled. It was a good achievement, yet our goal is not that. We want to make a sustainable business, hence as founders, we tried to find investors who wanted to support our business.

Finding investors was also not an easy task, many investors were doubtful to support us since our revenue was still small. Therefore we tried to increase our revenue too through a lot of strategies and one of them is through digital marketing activation.

In January 2022, we achieved hyper user growth and the revenue we want. Also, the investors now are convinced to support us. There was a time in the same week, three investors were approaching us and we did the pitching to those investors. A week later, East Ventures agreed to support us. In less than 1 year, we now have a million users, about 30 full-timers, and are onboarding around 80 interns this August. Also, our teams are spread all over Indonesia and we work fully online. It started from our dream and now it grows into a startup that can give an impact.

How did you manage to balance your study and work on this business?

Balancing study and working on this business is indeed hard when you just started it. I spent most of my day working on the research, and writing papers and spent my night working with Angga building the business. I studied in Naju, a small city in South Korea and there were no Indonesian students there.

Moreover, the place is also far from where my friends are located, thus I spent most of my spare time working on this business. When we started it, it was stressful but we still believed in our dream and if we started it, there was no way of backing out and we should produce something. Also what we started is a business, not only selling something.

In business, not only do we sell a product, but we also build a system. A system where this organization can work by itself and then we can work on other things. How do we do it? Recruiting the best team and here we build the human resources. From where do we get the best team? Connection. Collaborating with people, connecting people, managing people. Hence what we build is a team, the best team.

That is why we tried to build a strong networking system and also collaborate with them. COLLABORACTION, a collaboration that we do with action. Without action, there is no way this thing can happen. Thus, since we have already built a system, we can delegate all the daily work to the team and we can work on strategic things. That’s how I now manage to balance studying and working in this business.

What is your plan next?

Deep in my heart, I still want to make a biotechnology-based start-up. However, the break-even point for a research-based start-up is going to take a long time and there are a lot of regulations. As a consequence, we need thorough preparation. I hope that after I finish working on MySkill, I can establish a biotechnology start-up.

One thing that drives me and Angga to work on this business is to give an impact on society. To make a bigger impact on society, we need capital and that is why business is important too. MySkill is an Edutech career preparation and this platform helps people to get on a job and the skills that HR is looking for. Because usually, after we graduate, there are some skills that we can’t gain through our formal education.

There are a lot of people who join the live class in MySkill monthly and they left some testimonies. I want to share one of the testimonies from the people who joined the class. He was actually borrowing his friend’s money to attend MySkill class because he just got bankrupt. He just lived with his mother and he needed to earn a living, however, finding a job was really hard for him. After joining the class in MySkill, he got a job afterward. The success of these students drives our spirit to make this business better. The success of one individual can have an impact on his family. Then it will give an impact on his friends and lead them to become a leader or even to society. This kind of domino effect is the one that we want to achieve. Hopefully, through our simple dreams, we can make an impact to society and even to you too.

Erahmat was born in a city in West Java, Sukabumi. He studied Bioengineering at Institut Teknologi Bandung and currently pursuing his combined master-PhD in Convergent Medicine at UST KIOM South Korea. He has a big passion for education, business, and science. He loves to play and watch soccer and his favorite teams are Manchester United and Persib. If you want to contact him further you can email him at erahmat@myskill.id.