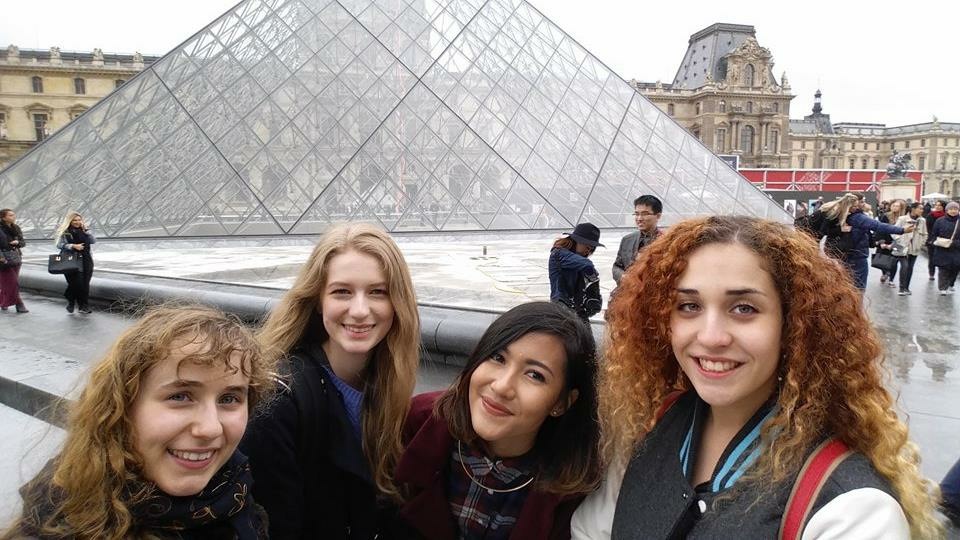 This week, we are featuring a casual chat with Libra Akila, a TV host and a dual degree student majoring in French Studies and Intercultural Communication at Universitas Indonesia and INALCO (Institut National des Langues et Civilisations Orientales).

My name is Libra Akila and I am 22 years old. At the moment, I am studying Intercultural Communication at INALCO (Institut national des langues et civilisations orientales) in Paris, France.

3.    How did you find out about this programme?

I found out about this programme from my lecturer. He explained that this programme would give us the opportunity to study in France for one year and also earn a bachelor’s degree from France. However I was still not interested at that time. Then I asked my friend who already applied to the programme, and from then on I was motivated to also take part and take the opportunity I’ve always dreamt of.

4.    Can you tell us a little bit about this programme?

Basically this programme offers three courses and each course only has one available slot.  There were IT, Teaching and CVI (Communication et formation interculturelle) courses and every year. Thankfully, my friends and I were both accepted into the CVI, the course that we both wanted.  Additionally, the French Government normally offers scholarship to Indonesian students who join this programme – each year the Government gives different kind of scholarship.

5.    Tell me about your activities in Paris?

Well, I study, travel, and dance. Occasionally, I got a job offer to host some events held by KBRI (Embassy of Indonesia in France) or PPI (Indonesian Students Association in Paris). That one time, I was a presenter at Pavilon Indonesia COP 21, a conference on climate change held by United Nations. During that event, I met so many important people, such as, Susilo Bambang Yudhoyono, Julie Bishop, John Key and Alec Baldwin. It was an amazing experience for me!

6.    What do you like the most from your current activities in Paris?

Of course dancing! Here in Paris, I dance at least twice a week. I’ve always been passionate about performing art such as acting, theatre, singing and especially dancing. I realised that performing is what I am good at and simply my passion since I was very young, I have participated in a number of competitions, festivals and a talent show. In terms of dancing, I participated in a couple of dance festivals in Canada and France by performing Indonesia traditional dances. Not only traditional dances, I love modern and hip-hop dances as well. I danced hip-hop with my dance group back in high school; we participated in a number of dance competitions and were asked to perform at some events. I can say that I love performing in front of a crowd.

Right now, I am a part of INALCO’s dance club. This dance club means a lot to me, as I can’t be away from dancing. I gained a lot of experiences – I could attend so many dance workshops by great dancers from all around the world. One of my favourite moments was when I attended Brian Puspos’s workshop. He is one of my favourite dancers and he is really influential to me.

Anyways, speaking of performing, I recently performed at our university’s dance event called Spectacle des Danses du Monde or Performance of Dances of the World. It was a great experience and definitely a night to remember. To be honest, I miss performing. I miss being under the spotlight – I was constantly working when I was in Indonesia, being a TV host or playing a role in TV series.

7.    So did your dance club help you during your adjustment period?

Definitely! Aside from dancing, this dance club helped me developing myself. This dance club is a platform for me to socialise and practice my French. The moment I first arrived in Paris to study, my French was extremely limited. I started to communicate and socialise with native speakers to improve my French.  This is also one of the ways to expand my network in a new place.

Not only that, it helped me a lot during the first few months when I was adapting to new surroundings. When you moved to a new place, you would feel like a total stranger because you don’t know anyone. Thankfully, this dance club has made me feel welcome, because I am a part of something in a new environment.