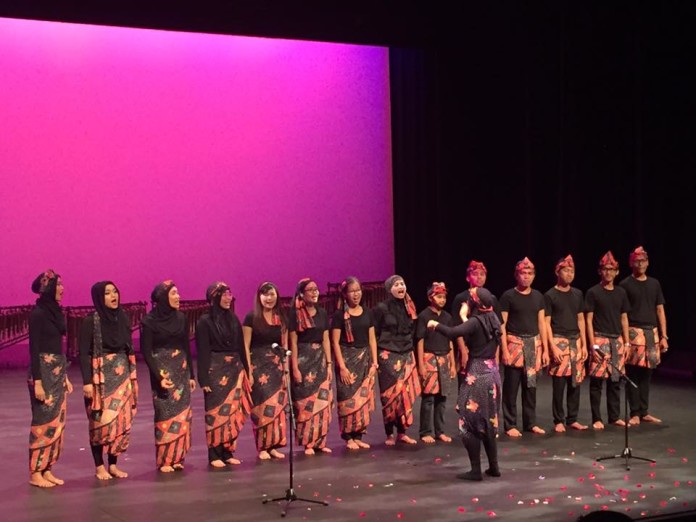 In the spirit of celebrating Indonesia Mengglobal’s anniversary, the articles in June will be related to the special theme of “Embracing Your Roots Beyond Borders.”

On this occasion, Lavinia Disa shares her memorable experience in embracing her roots as an Indonesian through a community-based choir named Swara Nusantara in New Zealand. She managed to pitch her idea to establish a choir consisting of Indonesian students, workers, and other professionals. Through this initiative, Disa and other Indonesians were not only able to reconnect themselves toward the Indonesian cultural values but also strengthen cultural dialogue between Indonesians and New Zealanders.

Since I was in junior high school, I have grown up joining school choirs out of my love for singing. Hence, it is just natural that I was looking for the same club in Auckland. Indeed, I participated in one, The University of Auckland’s Glee Club, but I found none among the Indonesian community there. Performing English songs with Kiwi friends was enthralling, yet there was still a void inside me longing for a way to embrace my roots as an Indonesian. But how?

The door was open in 2015 when the organizer of the annual Auckland Indonesian Festival was calling for performers to get on stage in the 2016 show. My heart sank when I knew that only dancing, fashion show, and batik painting were available; none of which was my skill. But I did not stop there. I mustered the courage to propose an establishment of a choir for the show. I pitched the idea to the committee, and they granted me full permission! Everything else then fell into place, leading to the birth of a choir named Swara Nusantara on November 7th, 2015.

In essence, Swara Nusantara is a community-based choir consisting of Indonesian people living in Auckland, New Zealand. As suggested by its name, Swara Nusantara aims at showcasing the voices of Indonesia to the public in Auckland by singing national and folk songs and playing traditional musical instruments, such as angklung and sasando. Regardless of age and experience, all Indonesians in Auckland were allowed to participate. To name a few, we had skillful sasando, guitar, and piano players, elementary kids whose parents wished their children to revise their Indonesian language knowledge, university students looking for extracurricular activities, and workers who wanted to reconnect with other Indonesians.

In the beginning, it felt like a one-woman show as I did all the work myself, from recruiting members, arranging the vocals, booking a room for rehearsals, to conducting the performances. On a cheerful note, though, after this choir was founded, my weekends felt more vibrant. From morning to afternoon, I would teach the members about vocalization, new songs to perform, and bits of simple choreography (thanks to my involvement in Glee Club, I learned a lot about performing arts management).

In addition to Indonesian folk songs, we were learning and performing local Maori songs, such as “Pokarekare Ana”, to allow for a cultural dialogue between Indonesia and New Zealand. By the same token, when invited to perform in front of an international audience, such as during the ASEAN Cultural Dinner at the University of Auckland and the Diversity Week at Auckland University of Technology, we sought opportunities to teach the audience how to play angklung and some Indonesian vocabulary. It was very satisfying to see their amazement in shaking bamboo instruments and collectively playing the melody of “Twinkle Twinkle Little Star”. At least when they got home, they would remember Indonesia as a country with rich musical treasures.

Post our first gig, the growth of Swara Nusantara had been more organic. Quality-wise, I had noticed better pitching, more coordinated movements, and increased attendance to rehearsals (I compiled videos on our evolution from slapdash singers to confident entertainers in the Auckland Indonesian Festival 2016 here). From originally 31 performers, comprising 17 females, 7 males, and 8 children, this figure continued to rise in the following year. Fortunately, I was not alone anymore as this choir was subsequently managed in association with Perhimpunan Pelajar Indonesia (PPI) Auckland, under the Division of Arts and Cultures, which I was part of, for two consecutive years (2016-2017).

Up until my study completion, Swara Nusantara had performed in many regular (i.e., the Auckland Indonesian Festival) and occasional events by invitation. For instance, on Kartini’s Day in 2016, we were featured in the opening of an art exhibition called “The Flame of the Pacific” by artist-couple Irwan Ahmett and Tita Salina at St. Paul Gallery. For the Indonesian Independence Day Celebration in 2016 at Mt. Albert War Memorial, we were the ones singing “Indonesia Raya” when the flag was hoisted.

One of the most significant highlights was when Waitakere Central Library requested our exclusive performance in Swara Nusantara Angklung Concert. This happened in 2017, after I passed down the leadership role to PPI Auckland’s new Division Head of Arts and Cultures. I remember sitting in the audience and watching the show with pride. If P. T. Barnum in America had a well-known travelling circus, I had an all-Indonesian choir in Auckland.

My last performance with the cast members was during the visit by the latest Indonesian Ambassador to New Zealand, Tantowi Yahya, who is a musician himself (see his joy when singing with us here). We picked the song “Pergi untuk Kembali” as a reminder that departures and good-byes are temporary. This is true with regard to Swara Nusantara. Although the group had completely stopped performing after most members graduated and went back to Indonesia, the memories shared among us live on. Contrary to the simplistic view of nationalism, merely singing folk songs does not make us patriotic individuals. Nonetheless, the physical, emotional, and social dimensions of rehearsing and performing together as a group have created a stronger bond of friendship among the members, and this is more than enough to embrace our identity overseas.